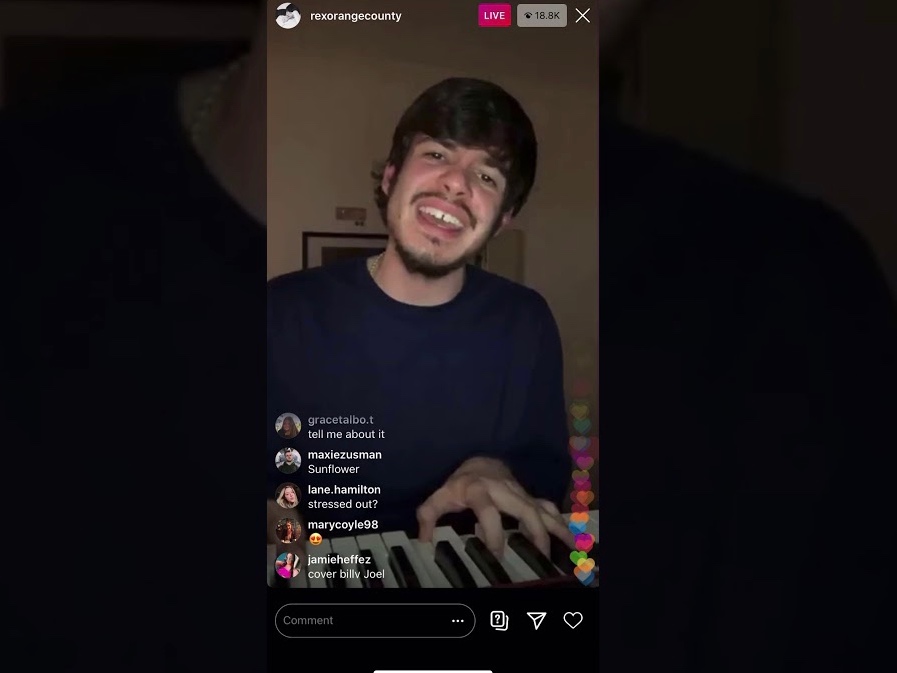 Rex Orange County plays piano for over eighteen-thousand viewers on his livestream. He tweeted after a livestream, “I love you all so much. Thank you for allowing me to do what I do for a living. I’ll never let you down.” He is grateful to be able to put out his music even in a time like this.

Bands all over the world have been devastated by the outbreak of Covid-19 that we are facing. Not only as people, where their families or themselves could potentially be infected, but also as smaller musicians who travel the world playing music for their beloved fans.

Touring and playing shows for people is most artist’s or music group’s favorite part of being a musician. However, aside from missing out on that, these performers are now out of jobs. They are self employed people who make their money from larger groups of people interacting with them whether that is attending their shows, buying merchandise, interacting with new posts on their social media accounts, or record sales on platforms such as Spotify and Apple music or social media like Youtube.

According to Output, the largest portion of an indie artist’s income is 30.5% live performance fees, 29.8% salary from their record label. The issue arises when the largest portion of the money they make comes from live shows. Because large gatherings during this pandemic have been outlawed, artists can not make nearly as much money as they would in a normal setting, which can be detrimental. Imagine if all of a sudden you were only making around ⅔ of your normal pay. They are struggling, but they have found a solution. Smaller bands and artists have been live streaming their music to try and fill the void left by live shows, wanting to give back to their fans who constantly support them, and they are just as bored as the rest of us.

One artist, Rex Orange County, performed for thousands of his followers on instagram Live all throughout march. He played his music from home on the piano and guitar with his songs like “Best Friend” and “Loving Is Easy” but he also played covers of artists’ music like Frank Ocean’s “Ivy” and Harry Styles’ “Sunflower, Vol. 6.” He took requests from viewers in the live chat section and had fun with it. Jessica Hubert ‘20 was one of those viewers and said “It was so cool to see artists like himself finding ways to give to his fans with everything that is happening.” Instagram Live is not yet monetized, but they are looking into doing so.

Other small indie bands such as Twin Peaks, Peach Pit, and Current Joys have been using instagram live to play their music as well. Unfortunately, the group members cannot get together in person so this has resulted in one band member having to play by themselves. Cadien James of Twin Peaks has guested in multiple live streams to play their music. Peach Pit has gotten creative with their lives. Singer and guitarist Neil Smith has been starting lives on the Peach Pit instagram and inviting the other members one by one onto the live. It is amusing to watch them try to play at the same time over the stream. They have also been posting IGTV videos with tutorials on how to play their most beloved songs like “Tommy’s Party” and “Black Licorice.” “In this weird time it’s really nice to see artists giving us a virtual concert, it made me tear up. They did some Grateful Dead songs like Stella Blue which was nice to hear,” said Josie Farwell ‘20 who tuned in to a Current Joys stream on instagram.

If you are interested in supporting your favorite smaller bands and artists during this difficult time, I encourage you to look on their websites or follow their instagram accounts. They will have information available on how you can help.