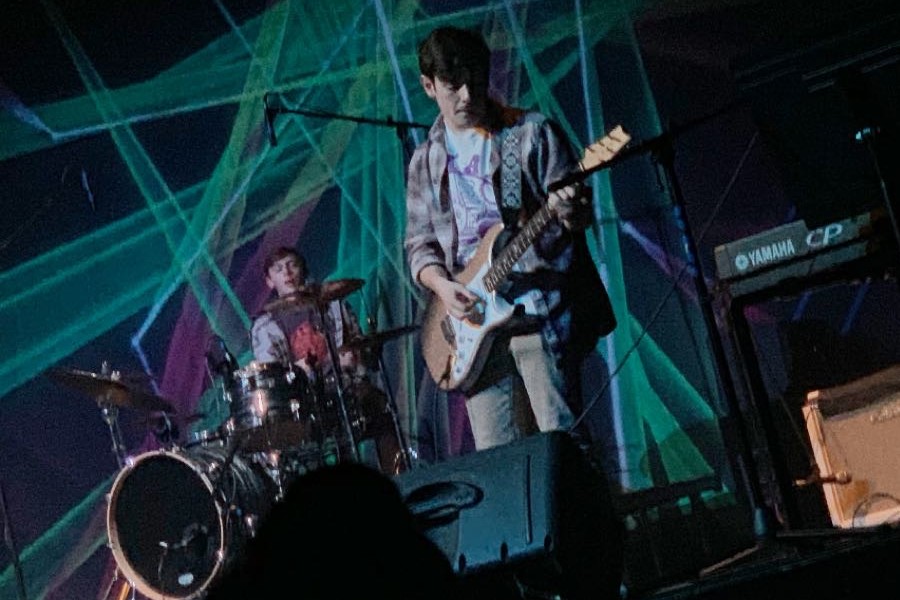 Sean Tisa, guitarist, plays a Blind Melon song with his band. Backed by Miles Montgomery 22’, Helene McNabb 22’, Ian McNabb 20’ and Mary Martin 20’, Sean knew this song was one for the ages. “No Rain by Blind Melon was for sure my favorite. We played that at 90s night,” said Tisa.

As the Class of 2020 reached the end of their High School career at HB, the many musically inclined students were disappointed by the cancellation of their last Guitar Night. But, in times of pain, Eric Perry, science teacher and Guitar Night Club administrator, found a way to continue the long respected tradition.

Spring 2020’s Guitar Night was a great experiment of what this community can achieve while under the pressure of all that coronavirus brings to the table.  On a pre-recorded Zoom meeting, musicians recorded themselves and their bands playing and submitted it to the Guitar Night Team. Students were skeptical, but understood, as it was the best option available going into a pandemic.

This year, things aren’t changing. “If we can’t be live, this is the best way to go,” said Perry. “It’s gonna be the same Guitar Night as last spring. The only difference would’ve been if there was a fall theme, which is kind of a tradition. But the club vote was a 50/50 tie, so rather than discourage half the people, we went with no theme. We may revisit that in May.”

Students this year are looking at this in a much more optimistic light. “Obviously I wish it wasn’t online, but it’s kind of our only choice now,”  said Jack Duquette 21’, bassist. “I think they did a great job last year and it will be great again this year.” Duquette had never participated in a Guitar Night up until this upcoming one. During his senior year, he plans to make it a good show.

Another thing students are excited for is to hear the rookies and new musicians play. “It’ll be nice to see all the upcoming underclassmen play some music for everyone, it’ll be fun to see,” said Sean Tisa 21’, guitarist. Performing in a handful of songs, he’s not afraid to pass the torch to the newcomers.

Ultimately, Guitar Night is about bringing this community together. Parents and students alike have gathered for years past to watch their kids and friends play some classic tunes. During this pandemic, the Guitar Night Club found a way to bring that same energy while social distancing. “[Guitar Night] is all about positivity. It’s not the battle of the bands,” said Perry. “I have too many memories to pick a favorite, every year has been spectacular.” He intends to keep that positive energy alive, and the musicians are feeding off of it. “I’m very excited for that feeling of people cheering for you. I know it’s remote, but you can still kinda feel it, because there are a lot of people watching. I felt that at the Nichols gig, it was great.” said Duquette. The Nichols gig was a live show over the summer organized by Miles Montgomery 22’, which had a great turnout.

A new genre has appeared on the Guitar Night scene, too: rap. One underclassman intends to perform songs by Travis Scott, Childish Gambino, and 21 Savage. This will be the first time ever that a song has been performed without an actual musical instrument. With a changing world, there too is a changing Guitar Night.

Guitar Night is following a similar schedule as last years’. For club members, the deadline for video submissions is Nov. 20, and the show is set for Friday, Dec. 11.