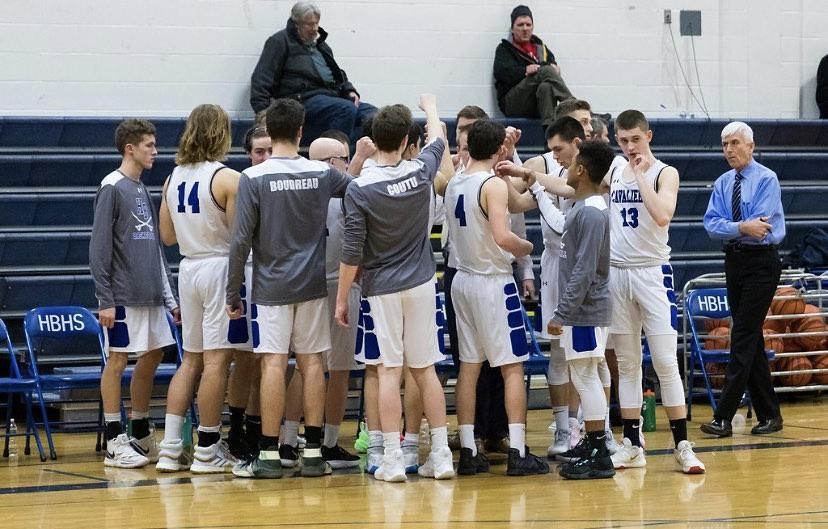 Players gather in a huddle during a timeout in last winter’s game vs. Hanover. HB went on to win this game to set them up well for the playoffs.

On March 15, 2020, Governor Sununu issued all New Hampshire public schools to transfer to remote learning, effectively ending all NHIAA playoff games. This resulted in the Division II boys basketball quarterfinals being cancelled. Bow and Conval were deemed “co-champs,” making a red-hot Hollis Brookline team, along with five other teams, runner-ups. This year, the HB boy’s basketball team will be looking to pick up right where they left off and make a run for the ‘ship.

Prior to the tail end of the season being shut down, HB had the most momentum heading into the quarterfinal round, taking an 11 game win streak into the playoffs. They crushed an undefeated Hanover team late in the season at home and then in the first round beat an impressive Laconia team in the final seconds. HB was slated to play Hanover on a Friday night at home which would decide who would go to UNH for the final four. Then, the season was shut down and the real DII champion would never be known. “I was really confident we’d win the whole thing, so it was tough to see it end before we had a chance. We finished the season really strong and had a lot of momentum going into the Hanover game before it was cancelled,” said Matt Dias ‘21, a returning player on the team.

Last year, HB had the most depth throughout all Division II on their bench. “You won’t find many teams that were made like last year’s team, it had 10 guys on the roster who were good enough to start on the team and produce good numbers,” said returner Rob Haytayan ‘21. Along with depth, they also had some of the most athletic students in the school on the team. Last year’s seniors Quinten Wimmer, Sander Wimmer, and Ryan Coutu were all three sport varsity athletes, while Grant Snyder was a two sport varsity athlete. The combination of size, strength, and speed benefitted the Cavs running the floor.

One of the most crucial factors to HB’s success is the team’s chemistry. You see it on and off the court and definitely makes the team run as one, cohesive unit. “Our chemistry was truly unmatched, we all became close friends off the court that enjoyed being with each other,” said Haytayan who is a proven leader on the team. Like last season, there are a few leaders on the team and the rest know their role. Bill Belichick’s phrase “Do Your Job” comes to mind with this team. Everyone has a job that they commit to, they play for their teammates, and are unselfish.

This year, the team will heavily rely on their ability to shoot the lights out. “This year’s team has a lot less big men coming in from the previous year. Last season we had a lot returning, but this year we’ll have to see some new big guys play with Robby,” said Dias comparing last year’s team to this year. Finding another big man to work with Haytayan inside the paint may be tough, but HB will adapt. “Last year’s team could get inside pretty easily. I think this year will consist of more shooting and ball movement around the perimeter than last year,” explained Brian Szewczyk ‘21 who missed last year due to injury.

The team’s ability to shoot was definitely shown in the Hanover game last season. Matt Dias hit a bunch of key 3-point shots late in the game and finished with 17 points, but Adam Razzaboni ‘21 was also consistent all last year getting solid minutes and knocking down jumpers. With the guard duo of Dias and Razzaboni barely scratching the surface of their scoring potential, look for them to be the main source of perimeter scoring.

In addition to HB’s starting lineup getting stronger, the competition in Division II has decreased as many key players on opposing teams have left and are now at prep schools. Teams like Hanover, Souhegan, Manchester West and the unrightfully deemed co-champ, Bow, are all losing their best players. This opens up the playoff picture for HB putting them right at the top of the list for contenders this season.

Finally, HB is going to come out every night knowing what they lost last season: a definitive ending to their playoff run. “This year’s team is going to play with a chip on our shoulder though, we know exactly what it takes to get to the championship and win,” said Haytayan on their motivation coming into this winter. Anyone could tell the frustration in the community when the playoffs were cancelled due to the virus. This was partly due to the fact that everyone knew they hadn’t lost a game in nearly two months, giving them the advantage against Hanover which they handed their first regular season loss to. Szewczyk ended by saying, “We want to win not only for us, but for our past teammates who didn’t have the chance to finish their season,” showing the tight bond formed between players on the team last year.

The HB basketball team is going to be out for revenge, not only for themselves, but the seniors who were cut short of a championship run last season. They aren’t going to be taking anything for granted and will leave everything out on the court. This is the last shot at a state championship for returners Dias, Haytayan, Szewczyk, Razzaboni, and Ethan Smith, and they will keep last season in the back of their mind when they take the court this winter. The Cavs first game will be December 12 against Kennett pending on any COVID related schedule changes.