The Pen is Stronger than the Pandemic 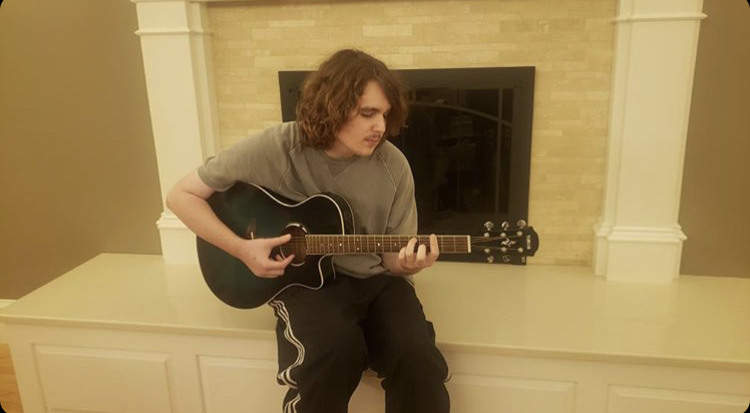 Griffin Harper ‘21 practices guitar on a cold October afternoon. Harper thinks back on his time in quarantine, and how it affected his views on making music. ¨Yeah, well for me quarantine.. it gave me a lot more freetime, so I was making one song a week and posting it online because it made it a lot more easier to improve.¨

COVID-19 has had a massive impact on every American’s lives within these past few months, but how has it affected artists? One of the main problems artists face is a lack of time they can use to practice, so what happened when, seemingly in an instant, all that anyone had was free time? During this time of prolonged isolation, we get to see how this paradigm shift affects our artistic community, and may even provide insight on the future of the arts as a whole in the wake of this pandemic.

The quarantine that resulted from the rising pandemic came as a shock to most everyone affected by it, and the isolation seems to have affected everyone in different ways, most notably the artistic community. Local singer and guitarist Darcy Hinkle, ‘21, thought that quarantine actually inspired her to make more music, stating, ¨I didn’t have much else to do and at first I was kind of overwhelmed by the time I had on my hands… but it gave me a lot of space to figure out what I want to do with music.¨ Other musicians were also impacted in similar ways, such as drummer Miles Montgomery ‘22, who said ¨just having more time to listen to music… I definitely discovered more bands that I never knew before… my biggest biggest influence has definitely been Grant McDonald.¨

WIth many local musicians being inspired to create more by the time made available in quarantine, what effect would this have on the wider musical community going forward? ¨I think the music community for a while has been moving more towards more consistent releases for artists, apps like Spotify for example expect creators to release one album every six weeks, and I think the effects of quarantine may make this expectation more prevalent,¨ local singer/guitarist/artist Griffin Harper, ‘21 speculated. Tons of artists have released new material with their time spent in quarantine, including bands like the Microphones, who haven’t had a proper release in sixteen years.

Quarantine seems to have had an overall positive impact on the musical community, but how did it affect artists of other mediums? ¨Honestly I drew more than I ever have, I went through an entire sketchbook,¨ said local artist Lauren Jones, ‘21, regarding time she spent practicing in quarantine. ¨I felt like I went back to my roots, and I honestly feel like other artists feel similarly,¨ she adds. With many famous artists distraught due to a massive revenue loss as a result of closing venues, it’s good to see that quarantine may have had a more positive impact on the smaller scale.

So, while COVID seems to have helped musicians a bit, the future for artists post-quarantine seems more unsure. If you want to donate to smaller artists to help during this financial crisis, the best ways to do so are through apps such as Patreon, live streams, or even merchandise.