HB Wrestling Picks up Final Win of the Season, Has Unfinished Business In the Playoffs 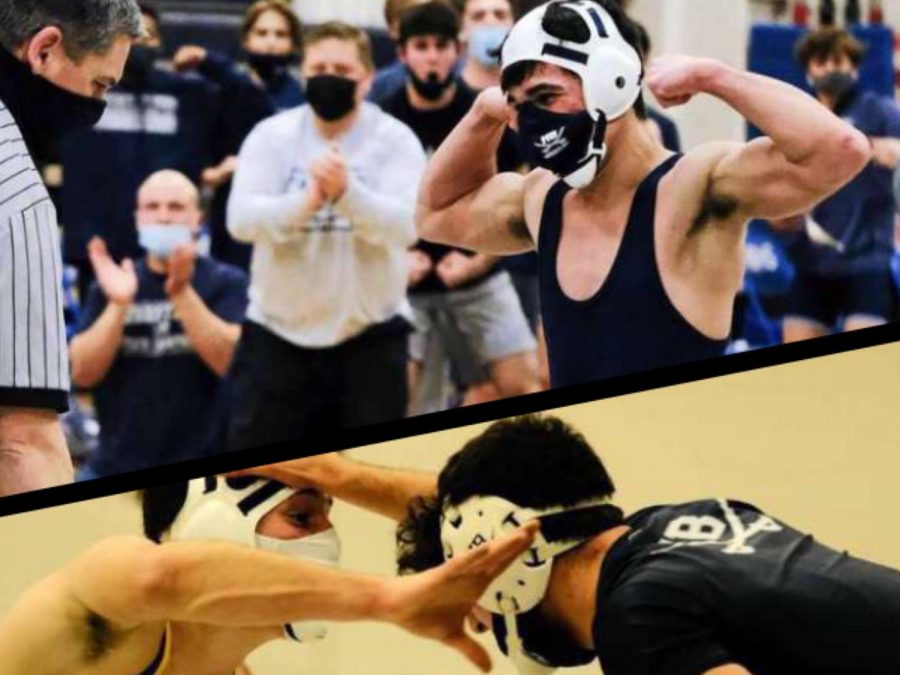 Teddy (‘21) and Troy (‘20) against wrestlers the #1 seed Bishop Guertin. Troy Moscatelli won his match against a favored opponent, and the win was a morale booster for the team. “I felt, performance wise, that my work in the practice room as well as the weight room had paid off and that my conditioning played a key role in my victory.”

“Our win over Goffstown was definitely a high point for us. Despite not having our head coach with us we went in and handed Goffstown a pretty hefty loss,” said Teddy Moscatelli ‘21, winning his individual match on a 9-2 decision. Moscatelli finished with a 6-3 record in the 163 weight class, one of the most competitive classes across the state.

Beating Goffstown was not only crucial for team morale, but also for the playoffs. “Just last Saturday we beat Goffstown to secure the 2nd seed in the playoffs,” explained Jack Duquette ‘21, also contributing his own win against Goffstown. “There were some amazing matches like Ryan Mercier’s amazing comeback down by 1 with 20 seconds left he was able to get a pin.” Every individual win proved to matter greatly towards team score, as Goffstown will be the 3rd seed in the playoffs. Securing a win over Goffstown solidifies HB as a threat to all teams in the playoffs, which is taking place on February 18.

Among winning wrestlers was state champion Troy Moscatelli ‘22, who improved his individual record to a commanding 8-1 in his weight class (138lb). “I tell the guys all the time that this is the most engaged I have ever seen an HB wrestling team,” Moscatelli stated. He believes the chemistry on the team is one of the advantages of the team this year, “Every meet everyone is up on their feet yelling and cheering on our fellow wrestlers which I feel is a major cause for our team’s success this year. Our team has a very tight relationship and we have each other’s back which I feel is very important.”

Due to Covid-restrictions, the team had to condense the size of its normal roster, which meant no room for newcomers due to the team’s diversity of previous upperclassmen. While a shortage of new members was a downside of the pandemic, there is no doubt that the group is thrilled to be wrestling this year, as well as competitive. “Getting to wrestle this season [has] really bonded us while in the past some people have taken advantage of the season,” said Duquette.

While the win against Goffstown was vital, the team has eyes locked onto their next opponent, Bishop Guertin, HB’s biggest rival and the #1 seed, undefeated against all Division II teams. A loss while battling an injury did not faze Teddy Moscatelli, with his goal to bounce back and get a win against BG in the later rounds of the playoffs, “I think despite being down a few varsity athletes, we wrestled very well against BG and they definitely [will be intimidated] to wrestle us again.” Both Teddy Moscatelli and Duquette picked up wins against tough opponents. “I felt very accomplished in the moment because I had taken out the (projected) best kid in the state at my weight.” Despite losing in total team points, HB impressively scored 22 points while dealing with injuries, and fought for  wins with every ounce of passion the team had.

If they advance past the semifinals, HB has a chance to get their revenge against the top dog, where Bishop Guertin will be hosting on their home turf on February 27. With limited spectators, HB will be hosting their quarter-final match on February 20, and if advance will again host for the semi-finals on February 24.