Who knew HB had MUN? 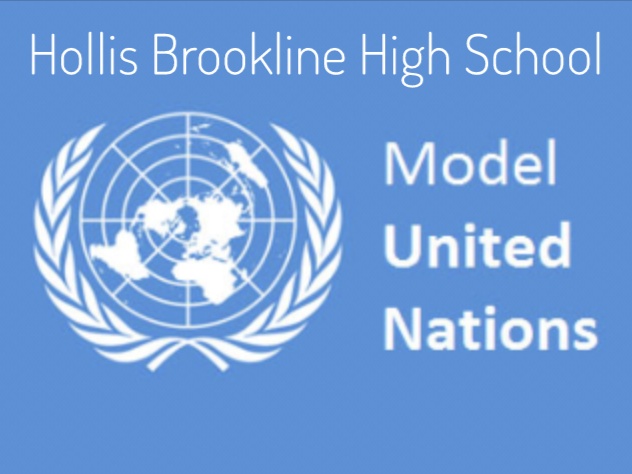 MUN is open to all students who are interested in debate and learning about different countries around the world in a political and economical setting. Josh Hill, Hollis Brookline senior, plans on participating in Model United Nations in college. “I did overall enjoy the experience because there was a lot of debating and good discussion,” said Hill. For more information about MUN, click here.

What is Model United Nations?

Model United Nations is an academic simulation of the United Nations. Participation allows for students to develop public speaking skills, writing skills, learn debate and how to do substantial research about a given country. Participants play the role of delegates, speakers or chairs from their given country and attempt to solve real world problems based on the knowledge and research that they have done about their country’s past decisions and disposition. This after school activity is found not only nationally, but internationally. With Hollis Brookline High School being located in rural New Hampshire, not every student has traveled out of the country. MUN is a way for HB students to become globally minded from the comfort of their hometown. Every year over 2,000 university students from 110 countries participate in Model United Nations, according to the Harvard WorldMUN Organization. Students at Hollis Brookline such as Alex Putney ‘21, have always been curious about MUN and what it was. “Is that actually a real thing at our school? I had no idea our school had MUN,” said Putney.

Josh Hill ‘21 participated in the Model United Nations event at the beginning of this school year as part of the debate club. Usually MUN would be held in person, but due to Covid-19, the event was held over zoom this year. “The zoom lasted around 10 hours, it was very long,” said Hill. The first three hours were preparation filled with research, while the rest of the time was left up for debates and learning how to draft a resolution in proper MUN format. This year, only three students participated. “ I think more people would participate if MUN wasn’t part of the debate club. No one really knows that we have MUN because it’s within the debate club. Most people don’t even know we have a debate club. It’s not advertised like sports or like the more popular clubs like the Math Team or HB the Change,” said Hill.

An after school activity such as Model United Nations will help students become not only open minded but globally minded, and Alex Putney agrees. “I think this school specifically could benefit from something like MUN, even though we already have it, just no one knows about it. I would’ve definitely done it. I would’ve definitely joined MUN because I am interested in political science and Model UN has similar international relations and political aspects that are important to know, and I think that’s interesting. I’ve always heard people talk about it, I’ve always wondered what that meant and I think it’s very cool but I didn’t even know we had a debate club,” said Putney.

What are the benefits of participating in MUN for high school students?

Participating in Model United Nations is one of the best ways for students to challenge themselves, improve professional skills, communication skills and become globally aware. An afterschool club like this will motivate students to keep up with world affairs and will inspire students to study abroad or pursue a career internationally.

Here are the top three ways MUN is beneficial for students:

By participating in MUN students knowledge of the world will tremendously increase by representing another country on a global level as well as interacting with other delegates representing other countries.

Analytic skills will always be a helpful tool in any career. MUN is the perfect event to practice these problem solving skills as students are in a simulated environment where they are challenged to solve real world problems.

Proper negotiation is another important skill to possess. Practicing diplomacy at MUN will allow students to become more knowledgeable and experienced when conducting persuasive discussions.

While MUN is still not an advertised club at Hollis Brookline High School, the students that find this hidden gem within the debate club will forever benefit from the knowledge and skills learned from participating in Model United Nations.