A Bittersweet Yet Real Ending 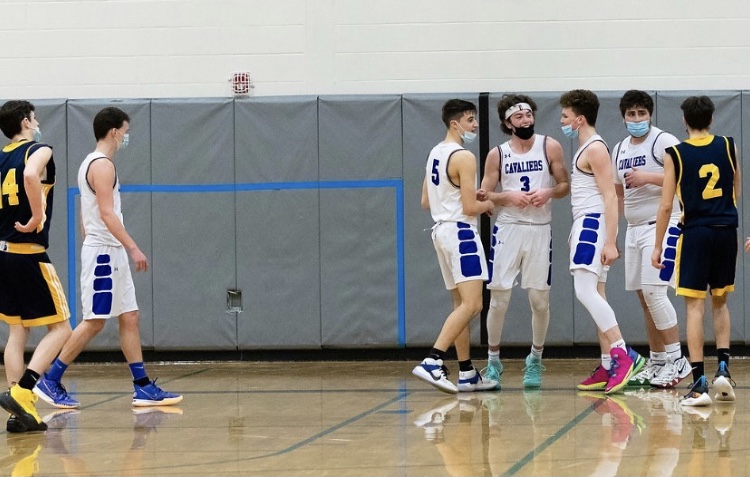 Pictured Left to Right, Matt Dias ‘21, Adam Razzaboni ‘21, Blake Bergerson ‘21, Kaleb Popham ‘23, and Robby Haytayan ‘21, in their last regular season game against Conval. Brian Szewczyk, not pictured, was thrilled to play with teammates that had such a good bond, “ It’s going to be hard to leave these guys but I’m sure we will all keep in touch and have the same chemistry that we had during the season.”

Around a week ago last year, my first article for Cavchron was published, where I wrote about the HB Boys Basketball team and their dominating 13 game winning streak. A few weeks before that, I was able to walk right through the gymnasium doors and snag a front row seat in the tightly packed bleachers. I took some action shots of the team’s leading scorer Matt Dias ‘21 with 17 that night, and felt the rumble of the energy from the HB fans, classmates and parents of the closely-knit team.

Not only was I impressed with HB’s performance over Hanover, but the team fully convinced me that their momentum was just beginning, and their playoff games weren’t something to simply miss. “At this point, it’s all a matter of finishing,” Boudreau ‘20 explained last year.

Well, you should probably know what happened two weeks later.

For starters, I was devastated. Of course, there were probably hundreds of other things to worry about at the time, so at first it seemed like just another casualty of the pandemic. But when the news broke that as a consolation, the team was awarded a co-runner up title with 5 other teams (with 3 teams they had beaten in the season). And with HB’s recent success, the title felt like a recreation league participation trophy. But then again, who am I to talk? I wasn’t even on the team.

“I remember thinking that it didn’t feel fair. We worked all year to get to where we were and it ended so suddenly” said Dias, who had acceled on the team in 2020 and was starting for most of the season. During the game I was able to attend, Dias put up his second highest point total of the season and led the team. His strong performances and lethal shooting was surely going to impact the teams performance in the playoffs. When cut short, not only were the feelings of success cut off, but even more so for the class of 2020.  “I knew that I still had another year to come back and play, but I felt really bad for all the seniors on the team”, expressed Dias. We’ll never know how far the team would’ve gone in the playoffs, but it is very safe to say that a co-runner up position sells the team’s 13 game win streak miles too short.

Eventually, time kept moving forward and the class of ‘20 graduated. It was time for the team to cut their losses and focus on hopefully somewhat of a season in 2021. However, things were looking up for the team. The covid situation got better by the fall. The team was able to have pre-season games in the fall in an outdoor court with actual referees, and against other school teams with rosters. “In the fall, we played a game every weekend outside of Bishop Guertin for about 2 months. The people on the fall team were only the 6 returning varsity players” said returning senior Brian Szewczyk ‘21, excited to take advantage of the season ahead. “As a senior that wasn’t able to play last year, I just wanted to make the most out of the season we had.”

It was clear from the game I watched last year that the team had chemistry. And Szewczyk agreed with me, “The past two years have been my favorite teams I’ve ever played with in my life. Although it took a week or two for us this year to start bonding, by the end of the season we were spending everyday together. Not just playing basketball but going out as a team when safe to do so.” When on the court, energy never left attendance which made the games increasingly exciting to go to. Not only was chemistry good, but the team were friends off the court and had been for many years. “We went out to dinner at least once a week. Tried to get the whole team together as much as possible”, said Blake Bergerson ‘21.

By the time the season was ready to start up again in 2021, everything was shaping up. Chemistry was on point, and the team had new strong starters ready to put up some points. Highlighting new starters was senior Robby Haytayan, who led the team in PPG (13.4), with a towing season high 31 points against Conval. Returning starters included Dias and Adam Razzaboni ‘21, who were essential to team success last year.

Dias knew that they’d be focusing on more specific metrics this year for team goals, “It was stuff like the amount of rebounds we wanted to get and shooting percentages we wanted to reach. We’d look back on games and learn from whether we did or didn’t pass the goals, then make changes if we needed to. This was something that worked for us last year so we carried it into this year too,” explained Dias.

To his point, the team finished with a winning record despite the loss of talented seniors. Scheduled to play 11 games, the team managed to play all but 2 games that were canceled due to covid. A shortened season yet successful, HB was set to actually play in the playoffs.

So there I was at 6:30 on March 4, watching the team get their chance to make their run in the playoffs against Manchester West. Well, I was in sweats watching a livestream with a bag of popcorn in hand. I was glad that each member of the team got to bring a few members of their family to watch, and never thought I would be thankful to watch my high school basketball team play.

With a final of 61-49, Hollis Brookline was defeated by Manchester West. Yes, it was a tough loss, and getting sent home early is never easy for a team, especially after winning the last three games of the season going into the playoffs. I myself was disappointed seeing members of my class walk off the court one last time. However, it was a concrete loss. A loss all the same, but playing in the playoffs gave the team an actual ending point to their season.  “I learned this year how sad it is for it all to end, but I’m glad we at least got to end it the right way”, said Dias.

It wasn’t hard to tell that every player on that team was grateful to get a chance to compete. After not knowing whether the season would actually happen,  “Even though it wasn’t the [ending] I wanted,  I’m glad we could play together and have a season at all”, said Szewczyk.

And for Dias, a starting member of that short-cut 2020 playoff run, it was an emotional ending nonetheless. “I’ve gotten so used to going to practice every night and getting ready on game day. It’s weird to not have that routine anymore, and to know it’s not coming back. I know that all the time in the gym and with the team was worth it, and I’ll miss it.”