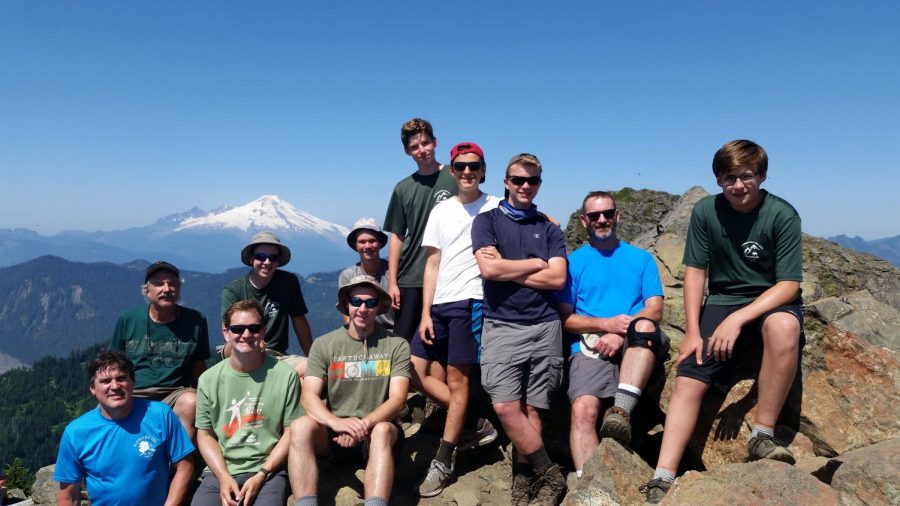 Hollis Brookline High School senior, Jack Robinson, (third from right) poses with a few members and advisors from Troop 12 on the top of Mt. Sauk in Washington state. “My favorite part of scouts was being presented with the ability to experience so much in the outdoors and I also received some invaluable experience in leadership,” said Robinson.

Trustworthy. Loyal. Helpful. Friendly. Courteous. Kind. Obedient. Cheerful. Thrifty. Brave. Clean. Reverent. In order to become a Scout, you always need to try to follow all 12 of the qualities above to the best of your ability.

In Hollis, New Hampshire, we have always been a farming town on the outskirts west of Nashua and abutting Massachusetts. We don’t have many attractions for vacationers or passersby other than maybe our local farm stands and a few restaurants scattered throughout the center of town. Our town has an average of around 8,000 people, but many of them are traveling or commuting elsewhere. The commute to Boston is just under an hour each way with no traffic, and many residents make this journey every day to go to work. In pre-COVID times, the traffic all the way down to Boston was a bumper-to-bumper nightmare. Now, the traffic is significantly lighter and sparse due to most people working from home.

Arguably the busiest road in our small town is Broad Street (Route 130). There is the Hollis Post Office, Pharmacy, gas station and auto repair, and the fire station along this road. Then you have the restaurants, grocery market, and farm stands. Where Route 122 meets 130, we in town call that the “Four Corners” and that is the busiest intersection in all of Hollis. In one corner, we have the Hollis Veterinarian and police station. Across from there is Hollis Country Kitchen Restaurant, which is good if you want a bite to eat while you are in town. In the other corner, there is a quaint grocery store; and the final corner; a tiny Dunkin Donuts with no drive-through option. Just down the road from that, we have two farm stands, Brookdale and Lull Farms. They both are situated on some of their many acres of farmlands, and are able to bring in the daily harvest for customers.

When you reach the center of town, you hit Monument Square, comprised of The 1859 “Always Ready Engine House”, the Hollis Public Library, the Townhall, Monument Square Market, Jim and Jan Squires Community Patio, and the Hollis Congregational Church. In the basement of the church, there is a multi-purpose area and kitchen for the community to use.

On Tuesday nights, the Hollis Boy Scouts Troop 12 use this space for their meetings. In Scouts, there is not one leader, per say. The scouts have a process of electing officials to coordinate and run these meetings so there is a constant rotation of people in charge. Additionally, there is a Scoutmaster who’s job is to facilitate the troop and help the scouts plan their next adventure. George Robinson, a 22-year veteran as a Marines Artillery Officer and a current 6th-grade teacher at McKelvie Intermediate School in Bedford, New Hampshire, has always been interested in Scouts, and even before Robinson moved to Hollis, he was the Cub Scout leader for a troop in Virginia. After his family moved north, he took on the role as Assistant Scoutmaster for some 18 months before stepping up into the Head Scoutmaster position. For Robinson, the choice was an easy one, “I love being outdoors, whether climbing a mountain or sitting in my backyard,” said Robinson.

There are seven levels of ranking in scouts, whether it is boy or girl scouts. Each rank or title can be attained by displaying your skill, courage, perseverance, dedication, knowledge, and many more important personality traits. In total, there are about seven different ranks starting with Basic Scout, continuing on to Tenderfoot, Second Class, First Class, Star, Life, and finally, Eagle Scout. In order to reach the rank of Eagle Scout, you must complete all prior ranks and follow the scout laws and oath.

Jackson Malone, who is a senior at Hollis Brookline High School, loves to get outdoors, bike, and hike, which is why he originally was drawn to joining scouts. Currently, he is a Star Scout and member of Hollis Troop 12, but has high hopes for the next year. “I am almost a Life Scout, and I should be one by the end of March. My 18th birthday comes at the end of September. I may have all the requirements for Eagle by then, and I hope I will,” said Malone ‘21.

Former Second-Class boy scout, Robinson understands the importance of scouts and what qualities you must possess in order to achieve Eagle rank. “Only about 4 percent of youth (now including girls) who participate in Scouting earn the rank of Eagle,” said Robinson, “These youth will have had training and direct experiences in peer leadership, they will likely be proficient outdoorsmen, they will have had multiple experiences offering service to their communities, and they will have had participated in a minimum of 21 different in-depth experiential learning opportunities, including practical life skills such as financial planning or first aid or cooking.”

Robinson’s son, Jack, is a senior at HB and has been in the scout program ever since grade school. On December 16 of 2020, he submitted his application and requirements to the Eagle Board of Review after lots of hard work. He wanted to be sure he gave the board plenty of time to review his work and induct him as an Eagle Scout before his 18th birthday in January. “Earning the rank of Eagle Scout mark’s a conclusion to a goal I set out on when I was still in elementary school. To me, Eagle Scout shows the character of a person and signifies someone who embodies its principles,” added Jack Robinson ‘21.

Every other year, the scouts who have achieved at least First Class rank are eligible to go on what the scouts call “the big trip.”As the name implies, this isn’t any ordinary hike in the woods or camping adventure. The scouts who are eligible for this trip propose a few ideas of places they think the troop should travel to and spend about a week away from Hollis.

Robinson ‘21 was quick to comment, “my favorite big trip was one we took out to the North Cascades in Washington. Here, I had the opportunity to trek deep into the backcountry and hike across mountain meadows and jagged rocky covered passes. We focused a lot on hiking, but we also went swimming, fishing, canoeing throughout the nine days we spent there.”

“The best part of scouting for me has been the trips. Almost all of them I never would have planned to do myself. I’ve seen great places and experienced great things with great people,” admitted Malone, “Not long ago I would have said that our troop’s Wyoming trip was vastly better than our Washington (state) trip. As I’ve mulled it over and thought about each of the trips, though, I can’t say I prefer one or the other. I’d say they were about even in terms of scenery, but Wyoming was much more vast, which I was not used to. On both trips we did one or two touristy things, and then the rest of the week we hiked.”

“If you think you might be interested, give it a try. We have a girls troop (Troop 465) and a boys troop (Troop 12) in Hollis, there’s a boys troop (Troop 260) in Brookline, and there are other troops in surrounding towns. You have an opportunity to learn a lot, have some fun adventures, and perhaps make some of your closest friends, based on these shared experiences. Scouting is a youth-run program. The scouts plan and run their own meetings and come up with all of their own ideas for outdoors activities. The adults are really just there for guidance, support, and safety,” outlined Scoutmaster Robinson.