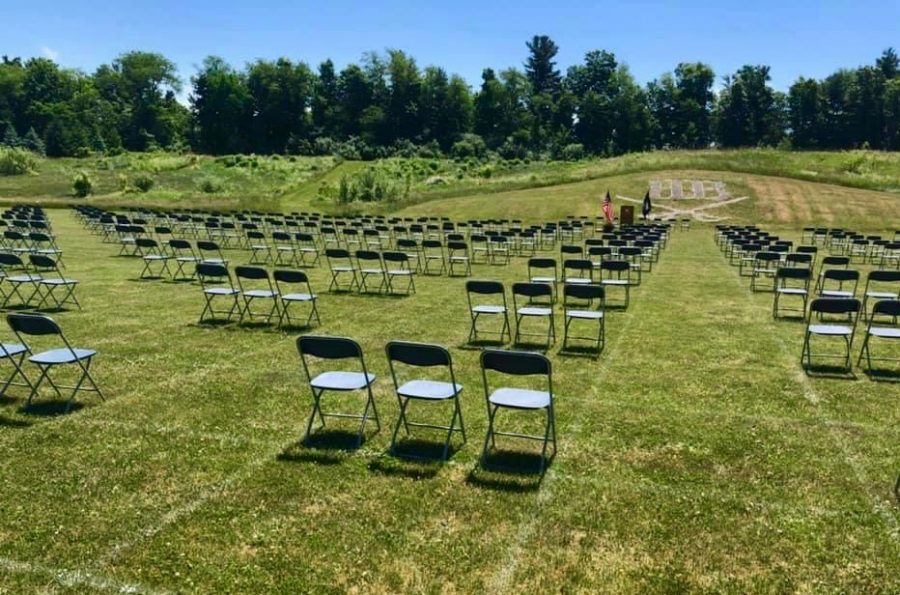 Graduation pods from the graduation of the class of 2020. Three seats per pod were given to each student providing them two parents or guardians to sit with them while they graduated. While the pod setup was upsetting to some due to limits to the amount of people in the pod, it allowed for a safe way to recognize the graduates' accomplishments.

Some students are worried about the potential negative effects in enrollment in prestigious universities. “Many colleges provide top ten students with scholarships based on where they rank, however that is not completely possible at HB anymore, and could affect many of our scholarships or even acceptance rates into prestige colleges,” said Charlie Hale, Class of 2023. Fortunately for Hale, Head of Guidance, Chantel Klardie, was able to alleviate some fears. “When students apply for college they need to put them in an equitable spot so that they’re all the same. So colleges will reweight your GPA and calculate it, and if they [colleges] know we don’t rank, they’re not going to put that in their decision-making process at all so this is in no way going to harm students,” said Klardie.

This decision to remove class rank stemmed from the belief that the top ten policy promoted a hostile and competitive environment for high school students. Many students at Hollis Brookline have witnessed firsthand the spirited and sometimes competitive demeanor of students when it comes to academics. In a school full of highly intelligent individuals, competition is inevitable. “I know you are all in silent competition with each other. You are all super bright wonderful kids… so I feel like there is a little bit of a sense of worth tied into their [students] rank or their GPA and I think that this is going to separate that and make people feel better about themselves,” said Klardie.

Another important aspect of the reasoning behind changing the class rank system was the pressure the Top Ten system put on students. “We don’t want students to be out of school due to anxiety of being unprepared for a test or quiz, to compromise their values to get the needed grade, or to fear taking a class that interests them and aligns with their goal simply because it won’t help them get into the top 10,” said Coop School Board Member Tom Solon.

Some students believe that the former system was effective in recognizing students. “My belief is that it is more of a congratulatory award rather than a shameful award, and gives these hard-working students less reward in high school, and as they progress through college,” said Hale. But, with the Top Ten system, hard-working students were unrecognized and the system was being abused. “We have received many reports of the negative impact of stress on students, of undesirable and unethical behavior caused by, and of perceived unfairness of the top 10 practice, dating back many years” He added that “Many hours of research and discussion convinced me that the top 10 practice created many problems and hurt our students, even those who eventually received recognition as one of the top 10,” said Solon.

The new Latin Honors System plans to be a more suitable system of recognizing student accomplishments. “I really think this is a much more equitable way to recognize students,” said Klardie. The Latin Honors system allows all students an equal and unlimited opportunity to be recognized for their academic achievements. “Some might say we [The Coop School Board] hope to trick students into success.  From my perspective, I acknowledge that competition is a powerful motivator for some, particularly many of the students that consciously pursue Top 10 recognition. Providing an alternative that produces a similar motivation while making it available to an unlimited number of students is a very positive change” said Solon.

The new Latin Honors System will be put into effect next year with the class of 2022.