No dancing at prom: Rumor or Reality? 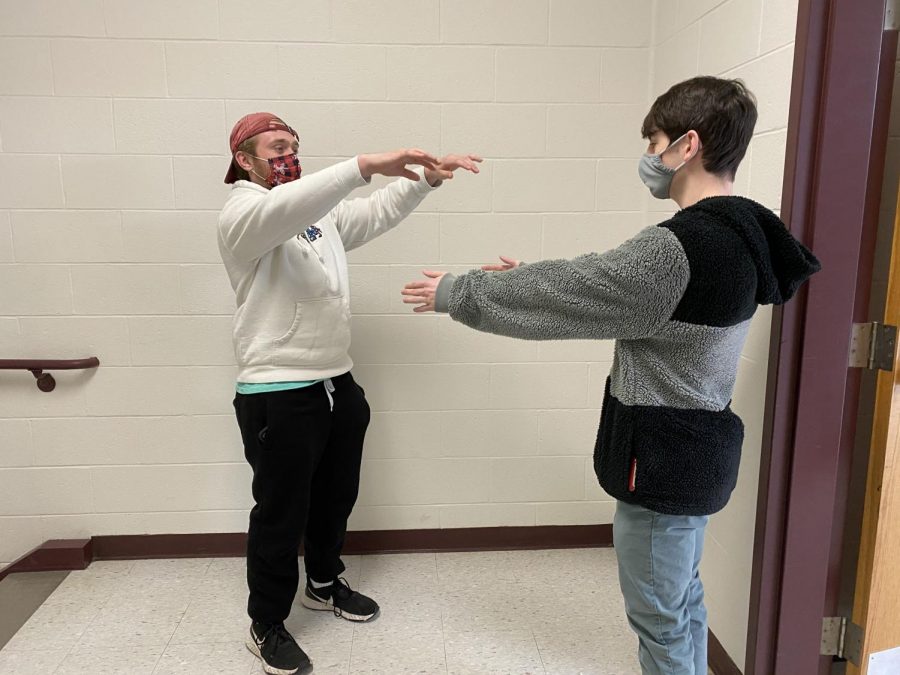 Students prepare for the possible reality of having to slow dance while maintaining social distance.

The day has finally come. After weeks of shopping for the perfect dress or tuxedo, you finally arrive at Beaver Brook for senior prom. The lights slowly dim, you anxiously walk to the dance floor with your date, excited for what seems like the culmination of the whole year. But suddenly to your surprise, a chaperone approaches and says, “Sorry, no dancing allowed.” Though this may seem vaguely reminiscent of the hit 1984 movie Footloose, it could in fact be the reality for students planning to attend this year’s prom.

Rumors have recently been circulating amongst the student body that dancing will not be allowed at prom this year. Senior Class Council and administration members alike have been bombarded with students begging for answers about the state of dancing, especially slow dancing, at this year’s prom. It is a fair question, with this year’s prom being limited by various regulations due to the ongoing coronavirus pandemic. Students have had to deal with limited ticket sales as well as an outdoor venue, amongst being masked and socially distanced.

Last year, prom was held at Alpine Grove in Hollis, and chiefly planned by student council and prom committee members, as well as advisors Claire Pare and Victoria Flaherty. “COVID prom planning was not only starting from scratch, but writing the book as to how to have a huge function during COVID times. And no other school was allowing a prom last year, either, so all of the ideas and procedures were original to the officers Mrs. Flaherty and I had last year,” said Pare. Despite these obstacles, last year’s seniors managed to plan an outdoor prom, complete with catered meals, in only a few months. Students at last year’s prom faced little restriction from dancing, other than a poorly timed thunderstorm, but were encouraged to stay with the members of their dinner table while on the dance floor. But other than this, students were allowed to dance at a safe distance and have a good time with their friends, albeit masks included.

This year’s prom was planned by Senior Class Council members and their advisors, however they faced an additional challenge in having to work with administration in order to plan prom according to the COVID-19 guidelines set in place by the NH Department of Health and Human Services. Council members worked closely with Principal Rick Barnes in order to ensure that prom could still be held, despite the ongoing pandemic. “I intend to allow dancing, it’s just a matter of what it’s going to look like. Last year, we had planned for dots to be marked off on the floor. However, we didn’t get to truly try that out because lightning ended prom before any dancing happened… I see that, at the very least, we will be offering what we offered for students last year. We know some form of dancing will be allowed, but it just might not be what people are expecting in the traditional sense,” said Barnes. Additionally, Barnes said students will “have to wait and see” when it comes to slow dancing, depending on the current circumstances of the pandemic. However, there is optimism, with students 16 and older being eligible to sign up for vaccines starting April 2.

Students and parents alike both want to see dancing allowed at this year’s prom. “It would be really upsetting to see dancing banned outright… Slow dancing could be a bit of an issue, but the pandemic is improving and the kids will be able to get their vaccines, so I think they still should be able to, especially after the school has allowed sports like wrestling and hockey. The seniors have lost enough to the pandemic this year,” said local Brookline mother Lisa Parr.

The current rumors about the dancing ban are nothing but just that: rumors. Dancing will be allowed in some form at this year’s prom, it is just unclear in what fashion at this moment. Slow dancing, however, still remains to be decided. “There is definitely a strong argument for slow dancing, but if there is one thing we’ve learned from [the pandemic], is that we can’t make decisions like this two months out. Things can change quickly, for better, or for worse,” said Principal Barnes.

Prom will be held May 21, with a rain date of May 22, at Beaver Brook in Hollis, with only HB students being allowed to attend.