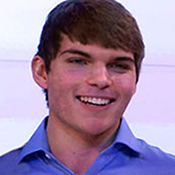 Jeremy Ide '15, designer of the "Wake Up with Friends" app

During the summer of 2013, Samsung Mobile App Academies were held across major cities in the United States such as Boston, Atlanta, Chicago, New York City, Dallas and San Francisco. These Mobile App Academies caught the attention of high school students who are interested in careers in the math, science, engineering and/or technology field. Ryan Biden, the director of product marketing for Samsung Mobile stated in a live video from Engadget, “Basically what this was all about was getting kids more interested in stem education… there’s something in it for us obviously but it’s more about giving back and so what we wanted to do, is we worked with six universities across the country that gave secondary school kids a chance to meet with graduate students, university faculty, mobile developers and other industry professionals  and get a sense of what the opportunities were in the mobile space…”

Jeremy Ide ‘15 submitted his own app called Wake Up With Friends which is a social alarm clock app that turns waking up in the morning into a fun competition between friends based on who can wake up and get ready the fastest in the morning. Ide states,  Ide placed second and was given a $10,000 scholarship from the Samsung Mobile App Academy.