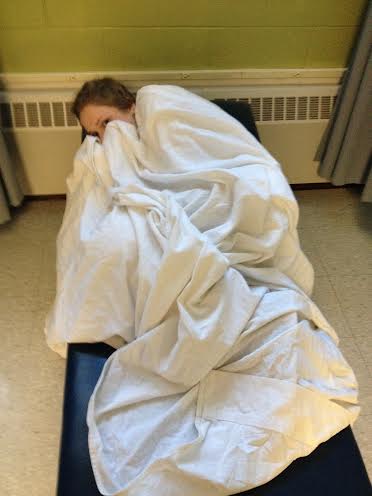 Students lie in the nurses office as their health slowly withers away.

“I just jumped because I wanted to see if the sword of Gryffindor was actually down there,” says Emily Tanner, ’16 as she lies in her bed, hot water bottle sitting on her head and thermometer poking out of her mouth. “Now I know it was a bad idea.”

Tanner had taken the plunge, and jumped into the icy waters of Lake Potanipo this last weekend, among scores of other students who had challenged each other to do the same.

At least twenty of the jumpers have now contracted a combination of hypothermia and pneumonia, and dozens more still go undiagnosed.

“We know that this isn’t the worst of what’s to come to these kids,” says Brookline Mayor, Alex Bonhom. “The lake has e. coli. That’s why it was frozen in the first place. So no one would jump in.”

“What?! No one told me that!” shrieks Tanner.