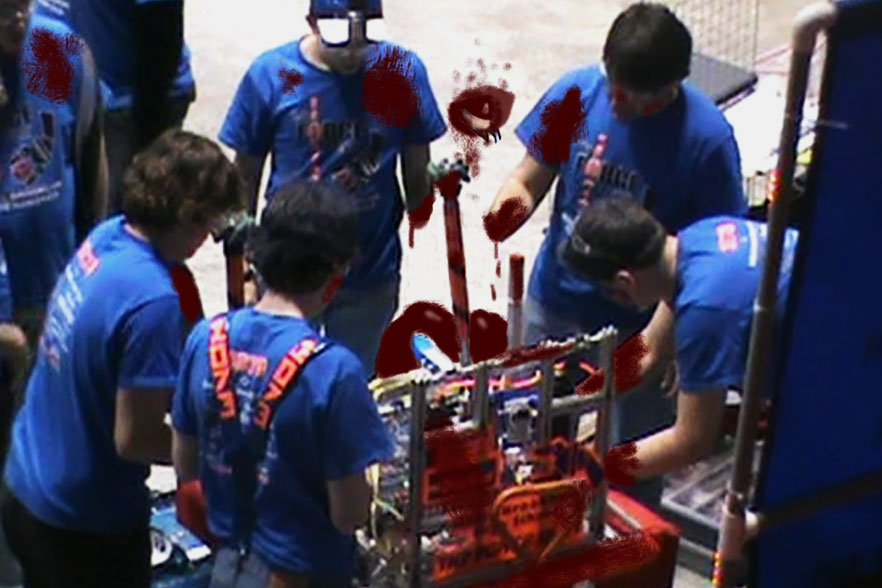 While students on FIRST Robotics Team 1073 were working on one of the major fixes to their robot, Atlas, when it suddenly foaming at the mouth and snarling, soon going on a rampage that caused the removal of three students’ limbs. During one of their matches on the first day of their competition, the robot was involved in a collision on the field, which resulted in the loss of one of the arms of the collector for the ball.

“I can see why he lashed out,” said Becca Courtemanche, ’15, as she clutched her bleeding stump, torn off at the elbow. “He was hurt, he was scared, and he didn’t know what to do. He’s a good robot, and he would never do this without cause.”

Chris Anderson, ’17, the safety captain of the team’s pit, knows of the dangers that come from robot rampages like these. “There wasn’t much we could do to prevent this from happening. All we can hope for is that the safety judges won’t penalize us for it,” Anderson said.

By using spare materials as temporary limbs, they worked on sedating the traumatized robot by switching it off and fixing the arm of the collector for their next match.

Thankfully, the situation was later amended with cloning technology the team utilized in order for some of their students involved in the musical. They used their DNA to 3D print themselves new, fully functional arms and legs. As a result, cleaning up after the incident was a snap.

“I’m surprised that there were no scars left after that,” Courtemanche added after her arm was replaced. “I’d say that though this was a pretty unexpected dilemma, we still came back and were ready for whatever else came at us. Not to mention we did pretty well during our remaining matches.”