Facing off in the Frozen Four 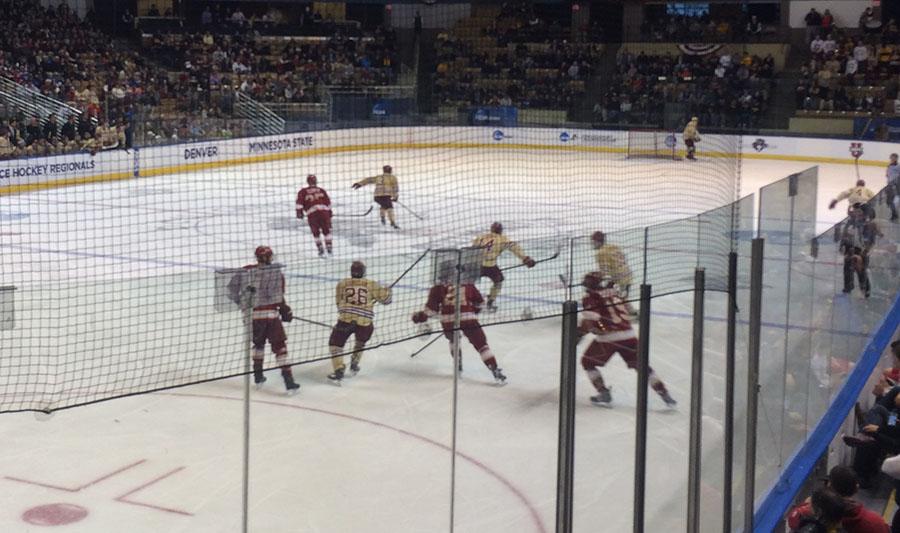 Boston College taking on Denver in the first round of playoffs at the DCU Center in Worcester, MA.

On March 29 and 30, NCAA Division I hockey regionals were held at four locations around the country– Saint Paul, Minnesota; Cincinnati, Ohio; Bridgeport, Connecticut; and Worcester, Massachusetts. Like every other year, only sixteen teams made it to the first round of playoffs on the road to the Frozen Four. The top sixteen teams this season included: Minnesota, Robert Morris, St. Cloud State, Notre Dame, Ferris State, Colgate, North Dakota, Wisconsin, Union, Vermont, Providence, Quinnipiac, UMass Lowell, Minnesota State-Mankato, Denver and Boston College

Going into the tournament, Boston College, Union, UMass Lowell, Minnesota and Wisconsin were viewed as favorites. Although most of the favorites ended up moving on further in the bracket, there was an upset early on in the competition when Wisconsin faced off against North Dakota, losing 5-2. Up until the last two minutes of the third period, Wisconsin and North Dakota were tied 2-2, but North Dakota pulled out of nowhere pulling out three goals in a mere minute and a half. Although this game was a nail-biter down until the last few minutes, no one expected North Dakota to win with such a significant lead at the end of the day. Of the other seven games in the first round of playoffs, the outcomes were somewhat expected, with Minnesota, St. Cloud State, Ferris State, Union, Providence, UMass Lowell and Boston College advancing to the second round.

As expected based off of season rankings, Minnesota, Union and BC advanced in their second round games; and yet again North Dakota State put up a strong fight which led them to also advance beyond the second round of playoffs. The game between BC and UMass Lowell was very close and had college hockey fans on the edge of their seats dying to know which Mass. team would make the cut into the 2014 Frozen Four. Going into the third period the Eagles were tied with the River Hawks 2-2, Lowell scored less than a minute into the period leading for the first time in the game 3-2. In less than thirty seconds, BC came back and tied the game once again. Finally, BC scored once again eleven minutes into the third period which led them to advance into the Frozen Four.