Tuxes and talent take the stage in Mr. HBHS 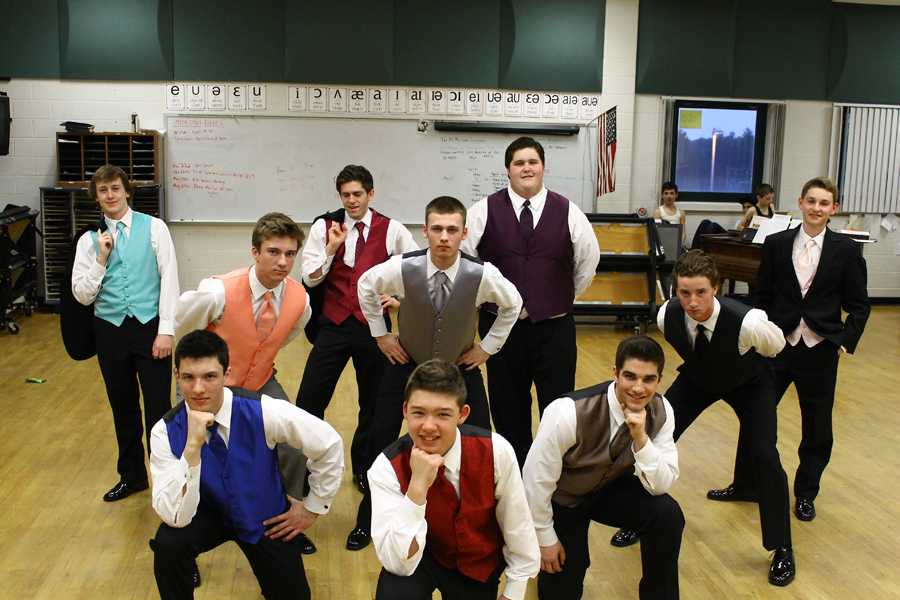 The hopeful Mr. HBHS contestants practice their opening dance one last time before going out on stage.

For a night full of talent and fun, the Mr.HBHS contestants took the stage and stole the hearts of everyone who attended. Each contestant worked so hard on their performance, but in the end there had to be a winner and the winner of the $100 cash prize was junior Michael Pattelena.

Some of the highlights of the night consisted of a variety of entertainment from dances to comedy and even two adorable promposals by MC Alec Paulson ‘14 and contestant Shea Farrell ‘14. The night’s events started off with a music mash-up and dance from the contestants. After, they answered a variety of interview questions. Ryan Buckley ‘14 was asked “What celebrity would you meet dead or alive if you got the opportunity?” and shocked the crowd when he guessed Adam Levine which was exactly what his guest Kashka Gammon ‘14 wrote as her answer.

The superhero portion brought back a wave of nostalgic for the 90’s babies. Hugh Devlin ‘15 went as beloved diaper baby comic book character Captain Underpants and Johnny O’Neil ‘14 accompanied by Ben Lombardi 16’  dressed as the classic spongebob heros Mermaidman and Barnacle Boy. The performance that made the crowd especially giddy was Michael Pattelena ‘15, dressed as Harry potter. From his disappearing act to his witty charm and poking fun at the MC’s, he truly stole the show.

After intermission, the boys came back with the ever important talent portion. The festivities started with Daniel Smith ‘17 accompanied by Tom Johnson’s ‘15 unforgettable reenactment of Will Ferrell and Jimmy Fallon’s “Tight pants” sketch. It was truly a crowd favorite of the night (and nobody could get the song out of their brains afterwards.) Another crowd favorite of the talent portion was Hugh Devlin ‘15 and his 1 minute challenges, which had everyone cracking up and even got MC Alec Paulson ‘14 involved in timing him. The talent portion ended with the contestant Shea Farrell’s funny and touching video of his everyday life, topping it off with his rendition of “Love Bug” by the Jonas Brothers to prom-pose to Natalie Haytayan ‘15. (She said YES!)

At the end of the night, Michael Pattelena ‘15  took 1st place, Shea Farrell ‘14 took 2nd and Kayne Robert ‘16 took 3rd. The group closed out the performance with a reprise of their choreographed dance that opened the show. Congratulations to all the contestants who participated.