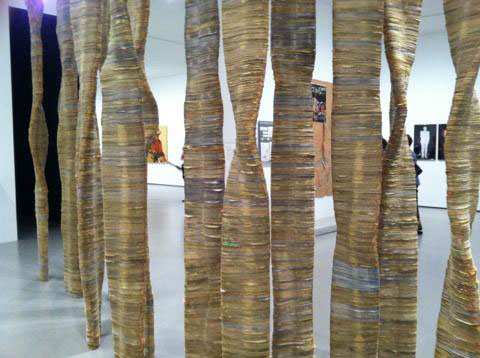 On Tuesday, April 22, the Spanish Club went on a field trip to Boston to tour the Museum of Fine Arts, and have lunch at an authentic Mexican restaurant in the area called La Siesta. The goal of the field trip was to immerse students in Latin American culture.

At the MFA students viewed the exhibit entitled Permission to Be Global/Prácticas Globales: Latin American Art from the Ella Fontanals-Cisneros Collection, which included various styles of art, ranging from: photo, painting, sculpture, performance art, video, and installation. The exhibit is comprised of four different galleries– Absence Accumulated, Borders Redefined, Power Parodied, and Occupied Geometries– and all works were shared from the collection belonging to the founder of Miami’s CIFO Art Foundation, Ella Fontanals-Cisneros. Each piece of art was inspired by the Latino culture in the Caribbean, South America and Central America. The exhibit will be at the MFA until July 13, 2014 for those interested in viewing Fontanals-Cisneros’ collection, but were unable to attend the trip with HB’s Spanish Club.

After touring the museum, the next stop was at La Siesta Restaurante in Winthrop, Massachusetts which is conveniently located right outside of Boston. Upon arrival at the restaurant, the staff greeted the eager field trip-goers in Spanish, and they continued to speak Spanish throughout the duration of the time spent at the restaurant. Jenna Swabowicz, ‘17, said, “While we were there one of the workers gave us a Spanish tongue-twister, and whoever could memorize it then pronounce it would win a sombrero. But in the end, everyone who participated in the riddle contest got a sombrero. It was so much fun.”

The trip to Boston was a culture-filled outing, and students learned about the Latin American culture in an interactive way that isn’t otherwise available in our community.