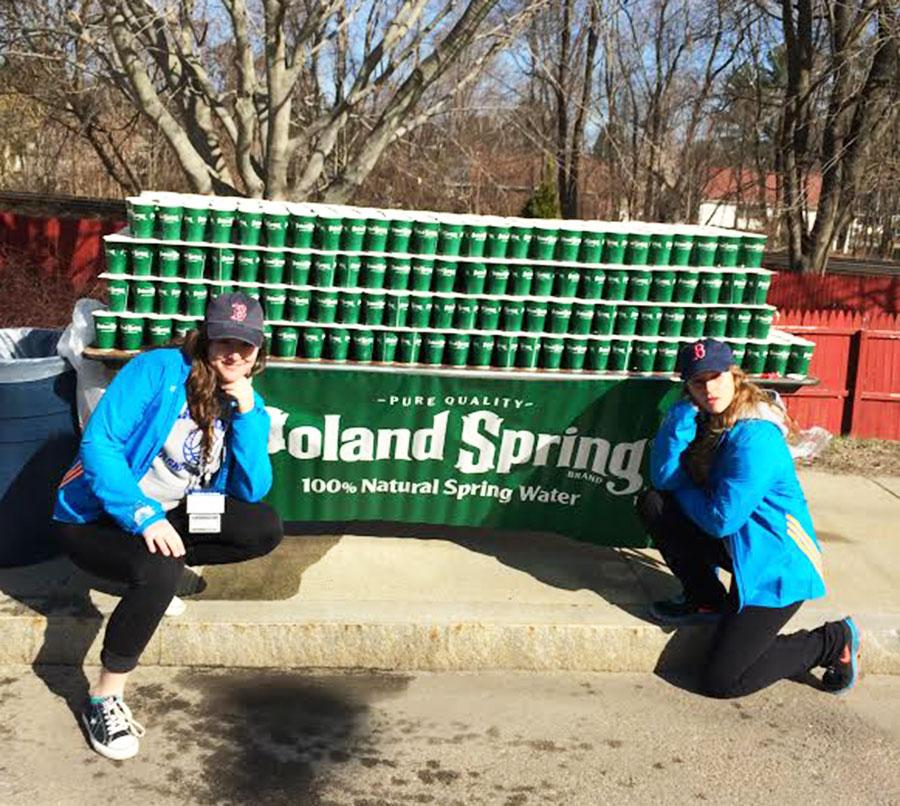 Seniors Maddy Snow and Jess Ciarcia handed out water at the 5th mile mark of this year's Boston Marathon.

If you are from New England, then the Boston Marathon is not just an event, but a holiday and celebration of community. It is always held on Patriots Day which is in honor of those that risked their lives to create the United States. A year ago, on April 15, two terrorists planted bombs at the finish line on Boylston Street. They believed that they could stand in the way of the runners, but Bostonians and New Englanders did not let this stop the Marathon.

This year, on April 21, the 118th Boston Marathon was run. Hollis Brookline Senior, Madeline Snow, volunteered at this year’s marathon. She was stationed at mile number 5 with the task of filling cups of water to hydrate the runners. “We were basically just filling up cups and handed them to the participants,” Snow said, “I was just trying to play my part and support the runners.”

The first wave of runners were the handicapped. Some on handcycles, many running, and of course the father-son duo of Team Hoyt. Team Hoyt is made up of a father who runs and pushes his son who is in a wheelchair for the 26.2 mile journey, and ran their 37th Boston Marathon run this year. Snow says, “It was so inspiring watching them run and all the supporters running around them. When Team Hoyt ran by, people were cheering and it was very moving.”

During the marathon this year, there was a heightened level of security. “We saw tons of police officers, and K-9 officers there to ensure the safety of everyone there,” Snow said, “For all the volunteers we had to have special passes with our names on them and have a form of identification on us at all times. I felt very safe.”

One team participating in the marathon was comprised of members from the Boston Police Department, they were running in honor of MIT Officer Sean Collier who was killed by one of the bombers a year ago, and also Plymouth, MA Officer Gregg Maloney who died in the line of duty on April 1, 2014. Along with the Boston PD, was a Boston Fire Department team who ran in memory of Lieutenant Edward Walsh and Firefighter Michael Kennedy who were killed on March 27, 2014 in a 9 Alarm fire in the Back Bay. Both of crews, in addition to the members of the Boylston Street Station were the first of the scene of the Marathon Bombings in 2013.

Snow said, “When I was there volunteering there was this feeling of community. I could tell that the Boston Strong spirit was very present and it was an incredible experience.” This year’s Boston Marathon seemed to have even more meaning than any other. It showed that the people of Boston and New England are truly Boston Strong and will continue to run the Boston Marathon for many more years.