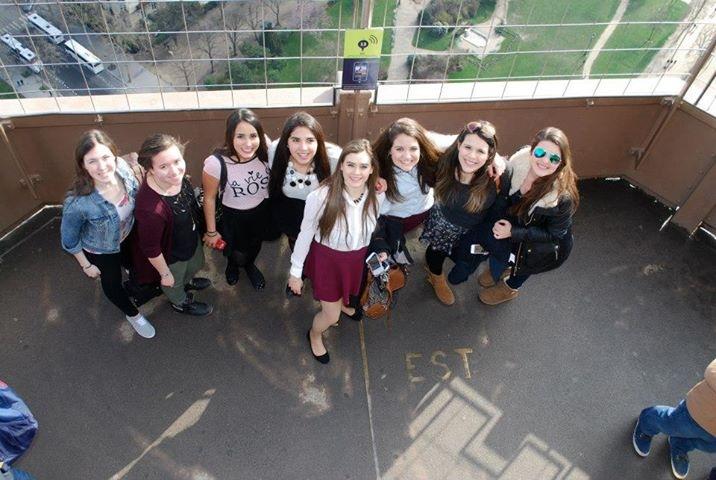 Emma Close and friends standing in the Eiffel Tower.

Most students view senior year as the last year they spend at home, but Emma Close, ‘14, decided to take the opportunity to go abroad for her senior year, and expand her horizons before starting her college career. Close boarded a plane for France in the summer and has had countless memories since– she has had the chance to be fully-immersed in a new culture and meet new people at the same time.
Upon arrival in France, Close encountered a huge culture shock. All of the American traditions that Close had been accustomed to for her whole life weren’t relevant to the life which she would learn to take on while studying abroad– quickly, Close picked up on social norms and habits in order to better transition into the life of a typical French student. “No matter how prepared and informed you are, you always kind of imagine a foreign country to have some sort of basic set of rules and that these behavioral expectations will be relatively similar to those in the US. In reality, this isn’t the case at all. You really have to start from scratch, throw out everything that was ‘normal’ in your home country and start forming new ideas about what’s normal, acceptable, and expected of you. The whole idea of starting from zero is pretty intimidating, and it’s probably the thing I had most trouble with upon arrival,” said Close. Some basic changes that Close had to adjust to include: mealtime habits, the educational structure, and extracurriculars. She continued to explain that more time is dedicated to meals, and school days are longer even though a few hours are dedicated to activities which don’t pertain to a class, and that most extracurricular activities such as sports and clubs are disconnected from the school. Another barrier Close had to overcome was the language barrier, although she has been studying French over the years there was still room for her to grow and improve her language skills. Being fully immersed in the language at school, in the home she’s living in and just in public areas have helped her become fluent in the language, she said, “I’ve become fluent largely because I don’t see other English speakers and rarely speak English–except in English class”.
Although study abroad programs aren’t very common for American high school students, Close highly recommends that students take the opportunity to study abroad. “Even if a student isn’t ready for a year long commitment, I highly recommend going and spending a summer, or 3-6 months in a foreign country. It’s an absolutely incredible experience– you learn so much about yourself and the world around you. You pick up a foreign language, become comfortable in another culture, and experience life without always having your family and friends as a crutch to lean on. It’s not an easy thing to do, but it’s entirely worth it in the end”. Also, studying abroad gives students the chance to live world-renowned festivals and holidays. In December, Close went to the Festival of Lights in Lyon, France–this city-wide festival consists of Christmas light displays throughout the city. There were even some moving lights that were projected onto buildings and told a story or recounted a historical event. The opportunity to attend the Festival of Lights is unique because the tradition began in the city of Lyon and has since spread around France. One of the many perks of studying abroad is getting to witness a cultural event in the city where it began, rather than simply reading of someone’s experience of it through a textbook. Lastly, studying abroad in the high school years can help prepare students for the college experience. Close said, “After spending a year in Europe, going to school in Philadelphia is going to feel close to home! Truly though, in a lot of ways, I’ve learned to fend for myself this year. I’ve crossed language barriers to make friends, and toughed it out in situations when I felt like giving up. Having gone through a year as difficult and rewarding as this one really makes me feel like I can do just about anything.”
Studying abroad during high school isn’t for everyone, but it’s definitely an experience to consider, because in the end it may change your life for the better.