MDMA: A need to know 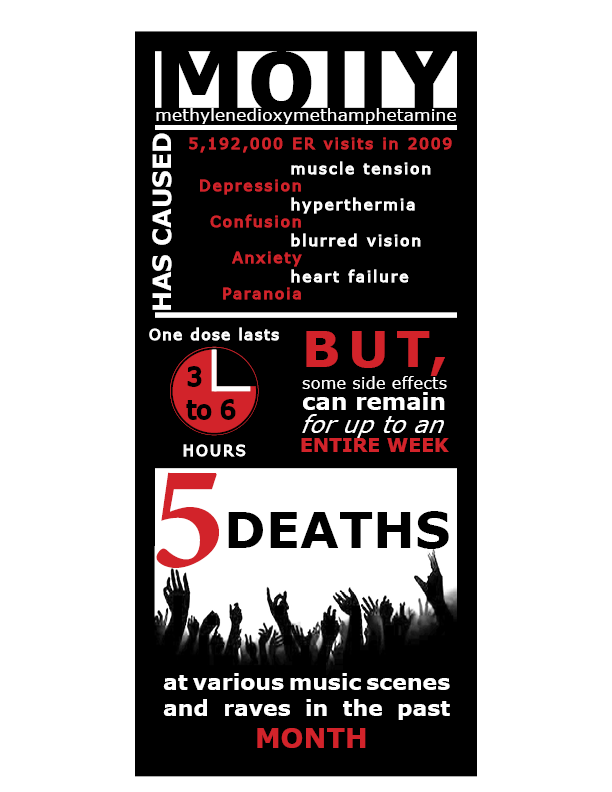 Within the past few months a lot of attention has been brought to a popular “designer” drug nicknamed Molly in the festival/rave scene. Its chemical name is known as methylenedioxymethamphetamine, but it is more commonly referred to as MDMA. It is an active ingredient in Ecstasy and was first created in 1912 by a German chemist named Anton Kollisch. This drug has recently been gaining attention by officials mainly because of a string of recent deaths on the east coast. In August at the House of Blues a 19 year old girl was said to have overdosed on Molly and was later pronounced dead. This past month alone there have been three deaths, two at a New York music festival known as Electric Zoo, one a student from UNH another from New York. And just this Sunday there was another death in D.C. involving a sophomore from the University of Virginia.

Police have speculated the reason for increased deaths due to Molly are because of a bad batch which is instead a bunch of deadly chemicals. Conor O’Shea ’14 said, “People associate it with being a less harmful drug when in fact it’s just as bad.” The problem with this drug is that it is dirt cheap and easily accessible for clubbers. It gives the user a feeling of happiness, can cause mild hallucinations and often causes users to want to touch those around them. The drug is extremely dangerous mainly because you never know what you’re going to get. Cathy Burbee in the nurses offices said “ The problem is that it’s often laced with something, thats what really concerns me, not only is it harmful to the user but it can also be something completely different than what they thought.” Most times it’s not MDMA at all and can have a deadly result as these last few months have proven. Hopefully people can become aware of this dangerous drug and stay away from its disastrous effects.