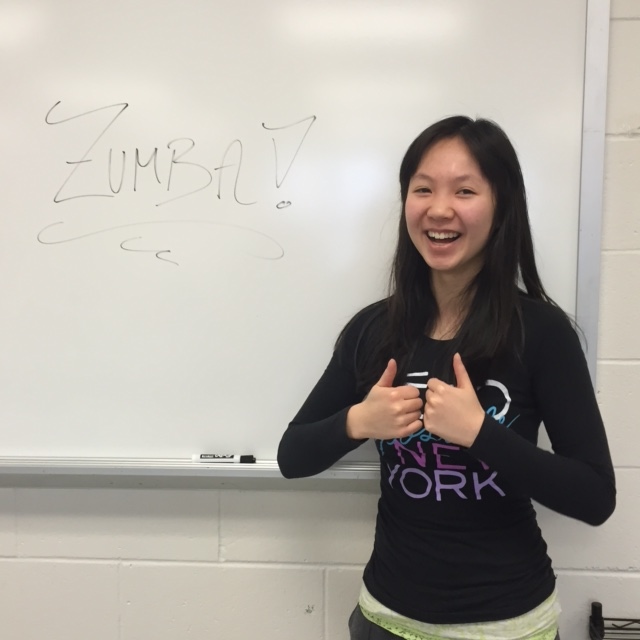 Spanish Club, Writers’ Club, Film Club…Hollis-Brookline High School is known for having a wide variety of clubs that enrich every interest you can think of. But this year, Sophomore Grace Lou burst on to the scene with an idea for a club that had never been thought of before.

Of her interest in Zumba: “It all started in seventh grade, when I saw an infomercial [for Zumba stuff] on TV.” Lou purchased the equipment and CD, but after learning the basics, it wasn’t what she expected it to be. “I didn’t like it at first.”

However, soon after that her mom began taking Zumba classes at a nearby gym. She kept trying to encourage her daughter to come with her, but Lou would refuse. Finally, she gave in and joined her mom for a class.

That love is what drove her to start the Zumba Club here at HB. She says that she “wanted to share her love for the dance style with her classmates,” and maybe inspire others to fall in love with Zumba too.

Lou’s passion for Zumba comes out in full force when she hosts a club session. When she is leading a routine at the front of the room, she never stops smiling. Not only that, but she has insane skill, coming across more as a professional instructor than a fellow classmate. Her happiness is contagious and makes the experience incredibly fun and rewarding.

If you’re interested in trying out Zumba Club, you can get into some gym clothes and head to Room 360 every Monday right after school. There, Grace will lead you through an hour-long playlist of high-tempo songs with Zumba routines she has committed to memory.You try your best to follow along with her moves! Make sure to bring plenty of water, because you’re going to break a sweat!