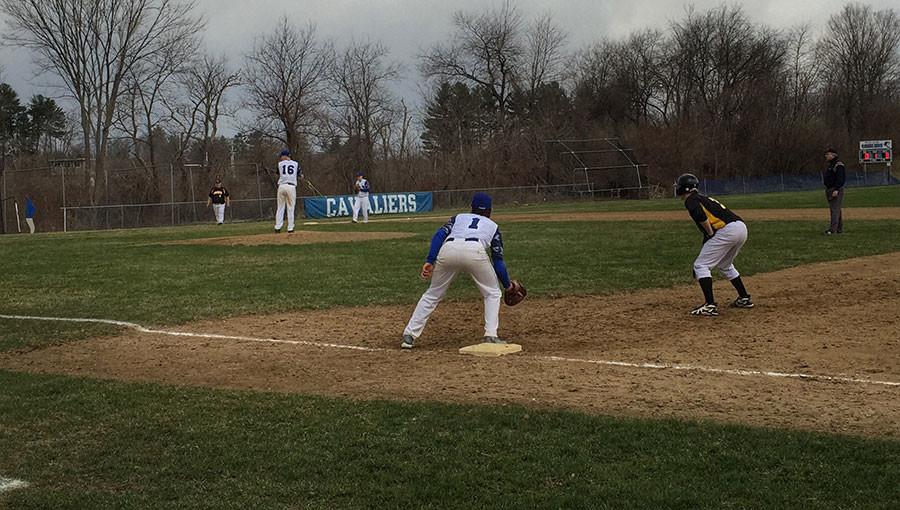 Jack Macleod ‘17 holds on a runner at first while James McCann ‘15 get set to deliver his 5th inning pitch.

The varsity baseball team hosted the Souhegan Sabers Wednesday at 4:00 P.M. on their home diamond. The two teams squared off in the first of this season’s two meetings, hoping to continue the success they had both found early in the year. The 2015 baseball season has officially been underway for two weeks now and coming off last Friday’s 12-9 victory over Conval, the Cavs felt good moving into Wednesday’s match up.

The weather provided a gloomy scene at the baseball field, with a cloud filled sky and strong winds that never seemed to let up. The game began with the Cavaliers taking the field in white vests and their new, blue undershirts. The Sabers, meanwhile, stepped up to the bat dressed in their traditional black and yellow jerseys. As soon as the game had begun, the Cavs found themselves in a quick hole. A few well-placed singles and untimely throwing errors by the Cavs, led the Sabers to go up 3-0.

After making their way through the top of the first, the Cavs had earned their chance to hit. Returning Varsity player, Cam Chrystal ‘16, led off the bottom of the inning and quickly added a spark of life to the Cavs’ bench. On one of the first pitches he saw, Chrystal made solid contact and watched as the ball, carrying in the wind, bounced over the fence in left center. Chrystal explained that the contact with his first high school home run “felt good coming off the bat.”

A bloop-single to right and aware base running by Hugh Devlin ‘15 led to a James McCann ‘15 ground out that scored Devlin. McCann’s RBI cut the Cavs’ deficit to just one moving into the second.

As the game progressed through it’s middle innings, the Sabers’ bats came alive. Center fielder Chrystal  said, “They’re a good team. Our pitchers threw strikes which is all we can ask for. They just hit the ball well.”  The game ended in a Sabers victory, 17-6, after only five innings due to NHIAA rules.

Though it was a long game for the Cavs on both sides of the ball, it’s important to note the bright spots that occurred. First year varsity player Nate Corsetti ‘17 performed well at third base throughout the game and provided two RBIs on a line drive single, while Kyle “Squiggs” Szewczyk  ‘16 slapped a pinch hit single into center field late in the game.

The regular season has barely begun and the schedule provides the Cavs with over ten more games before the commencement of the playoffs. Moving forward next week against teams like Lebanon and Sanborn, Chrystal said, “If we work on correcting the simple mistakes we should be fine. It’s early in the season and we have a talented team.”