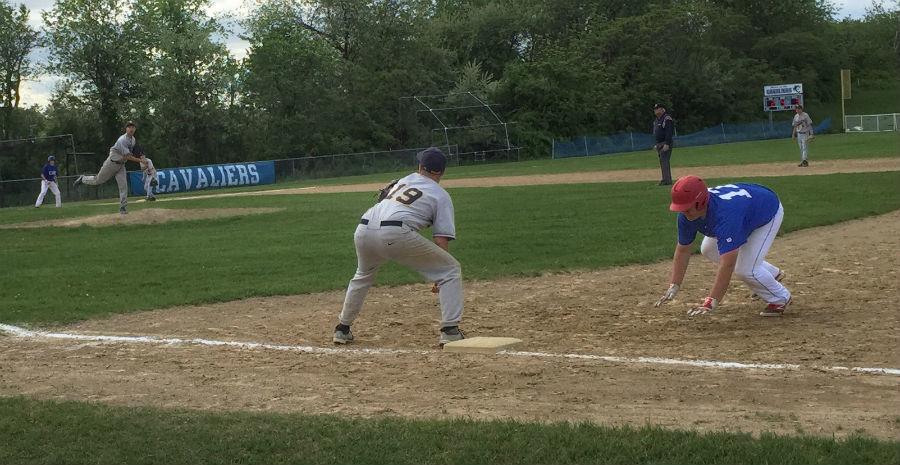 Ian Mauch '18 slides back into first base on a pick off attempt.

The JV baseball team defeated Conval Wednesday by a score of 9-3. The Cavaliers took on the visiting Cougars in their second matchup of the 2015 season. Coming off of a “heartbreak loss” against Milford in extra innings Monday, the Cavs looked to redeem themselves in the one of the season’s last home games.

Aaron Etchells ‘17 got the start on the mound for the Cavaliers while Stephen Peik ‘17 was behind the plate doing the catching. Etchells went four solid innings, only allowing three runs on very few hits. Through the first four innings, he performed well and threw strikes so that the defense behind him could make plays when necessary.

However, a good outing by a pitcher means nothing if the offense doesn’t provide the run support needed to win. Through three innings, the Cavs only managed to score one run on a total of three hits.

In the bottom of the fourth the home team’s offense suddenly came to life. Sparked by an Aaron Etchells’ leadoff double in the gap, the Cavs put together a string of hits that scored four runs. Along with singles from Ian Mauch ‘18 and Mitch Dreyer ‘18, sophomores Stephen Peik and Richard Cadario both hit two RBI doubles. At the end of the fourth, the Cavs led 6-3.

Going into the fifth inning, the Cavs decided to relieve Etchells and make the call to their bullpen.
“We have so many options” explained Sartell. “This squad has very deep pitching.”
Ultimately, a decision was made and Nick White ‘17 was called on to take over on the mound for Etchells, who moved to first base. White dominated the Conval hitters and wouldn’t allow a run for the rest of the game, throwing a total of seven strikeouts through three innings of relief.

Another strong offensive display from the Cavaliers came in the bottom of the fifth. Led once again by Etchells and Peik, the Cavs were able to add to their lead. Capitalizing on defensive mistakes by the Cougars and a Jeremiah Jacob ‘17 RBI single to right, the Cavs took a 9-3 lead which they would maintain until the end of the game.

One of the most impressive performances on the day came from Mitchell Dreyer ‘18. The second baseman batted leadoff and went 3-3 with three hard hit singles to the outfield. Throughout his first high school season, the freshman has acquired a reputation with his coaches as a player who is “always on base”.

With three games left in their season, the JV Cavs baseball team heads to Windham on Friday to take on the Jaguars. The team currently holds a record of 7-5.