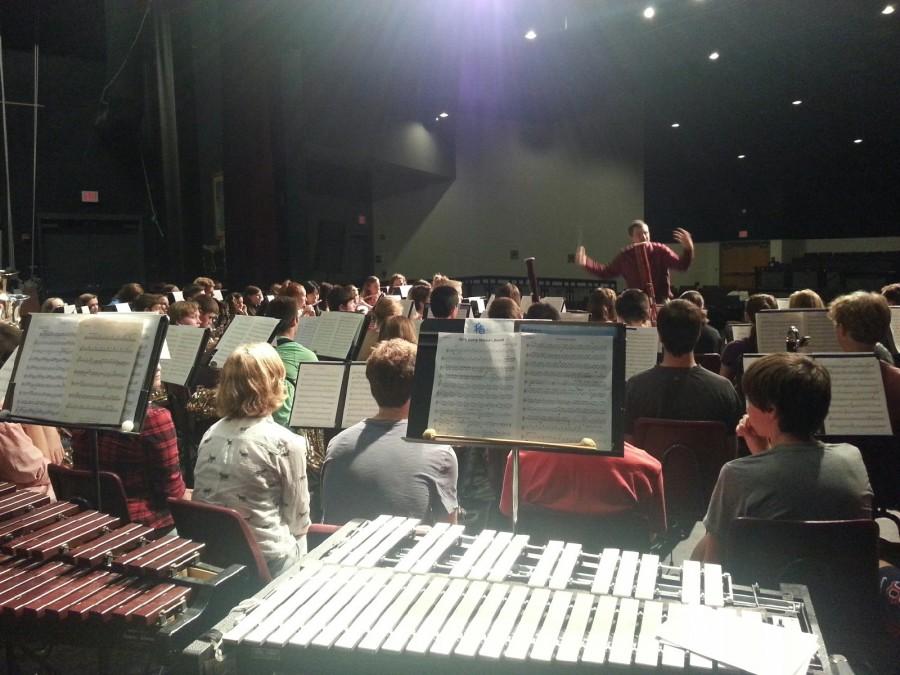 Last week on Sunday, Sept. 20, the Hollis Brookline High School Concert Band “worked alongside musicians from Souhegan, Milford and Campbell and harmoniously combined for a great day of music under the baton of Plymouth State professor, Dr. Mark Stickney,” said Dave Umstead, HB’s band teacher and coordinator of this event. This was the sixth annual Band Fest coordinated by Umstead and acted as a great opportunity for all participants.

In order for such an event to happen, a lot of hard work is put in by both students and directors. Students first find out about the festival around one week prior to participating, soon after arriving at back to school. These students, about 20 from each school, work diligently to learn eight songs. This year, the songs played include: “Homeward Bound,” “Vertigo,” and “Festivo” along with five other pieces.

Caitlin Ross ‘17, a euphonium player for this year’s Band Fest said that “meeting people from other schools” was one of her favorite aspects of the event. Meeting students from other school seems to be a popular aspect of the show.

Chris Aulbach ‘17, tuba player for Hollis Brookline, said “I liked the whole thing,” he replied, “but I liked the concert at the end because we got to listen to all of the hard work we’d put in over the past two weeks.”

Though the band has other opportunities to take part in festivals like this one, they are often more exclusive, and  only allowing a few students to participate. At the Band Fest, nearly four times the amount of people are welcomed to participate and are able to learn from some of the best professors in New England.

Another helpful aspect about the Band Fest is that it is early in the fall, which Umstead states, “gives [the students] the opportunity to work with what they learn” throughout the rest of the school year.

Each year the participants are exposed to a new composer who helps to build their repertoire and make them into better musicians overall. Umstead says, “it’s good to have different experiences” which is one of the many reasons he continues to organize the event.
In his twelfth year of teaching at HB, Umstead is looking forward to continuing working with the potential which his classes currently express.