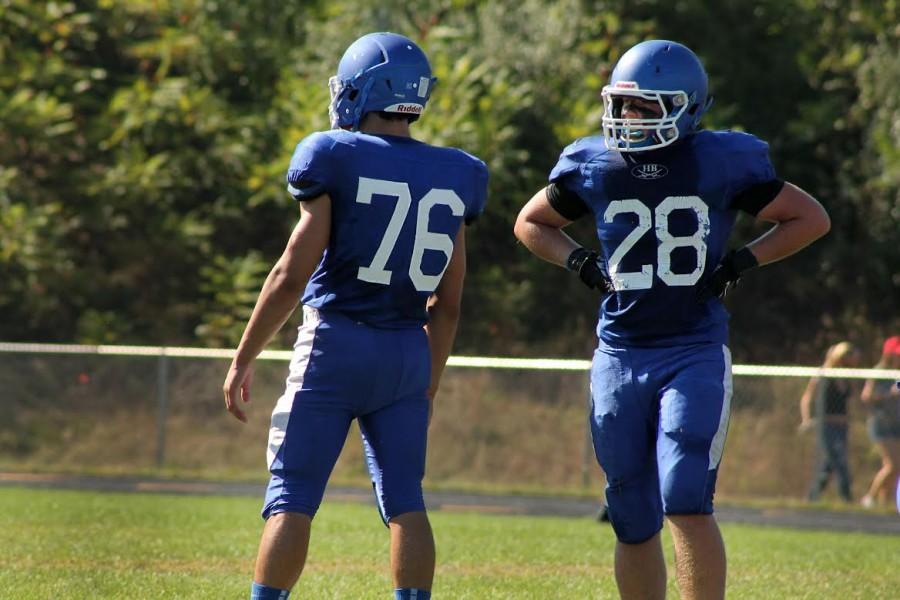 Peter Bertone '16 and Kayne Robert '16 take a breather during a recent win against Sanborn.

The Cavaliers football team fell to the John Stark Generals on Saturday by a score of 17-13. It was a cold, breezy afternoon throughout the game, which promptly kicked off at 2:30 with an impressive singing of America’s national anthem by Vanessa Hale ‘16. Coming off a big loss at Souhegan the week prior, the Cavs entered Saturday’s game with a 1-3 record, looking to bounce back and make a statement win.

Riddled with punts and flags, the first quarter ended scoreless. In the second, the Generals were able to strike first on a short run after a blocked punt, but missed the extra point, which made it 6-0. Later in the second quarter, the Cavs offense threw an interception on their own 25 yard line. With great field position, the Generals scored another 6 points on a ten yard run, a few plays later. In order to make up for their first missed extra point, the Generals went for the two point conversion and capitalized on the play, making it 14-0.

Matt Simco ‘18 was able to help keep the Cavs in the game with two interceptions, one coming in the first and another in the third, which led to the Cavs first TD of the game: a ten yard pass to Simco in the end zone. In his second year with the program, the sophomore has truly started to play an impactful role on both defense and offense.

In the fourth, after a John Stark field goal made it 17-7, the Cavs scored again on a Jack Byrnes ‘17 run. With just three minutes left in the game, Byrnes’ score brought the Cavs within just four of the Generals. The Cavs efforts were not enough at the end, though, as the game ended 17-13.

Although the comeback couldn’t be completed, the Cavs fought hard to get themselves back in a game that they had been down in the whole time. On offense, great contributions came from Wyatt Farwell ‘16 and Brian Delaney ‘17. Farwell, who consistently ran hard on the ground, racked up positive yards every time he touched the ball. He also caught a few passes throughout the game, with one impressive diving grab coming in the first quarter. Brian Delaney’s ‘17 big plays on the ground as well as in the air helped the offense move down the field multiple times throughout the game. Both players also contributed to the defense with multiple tackles.

The Cavs next game takes place this upcoming Saturday (10/10) at home against Pelham.