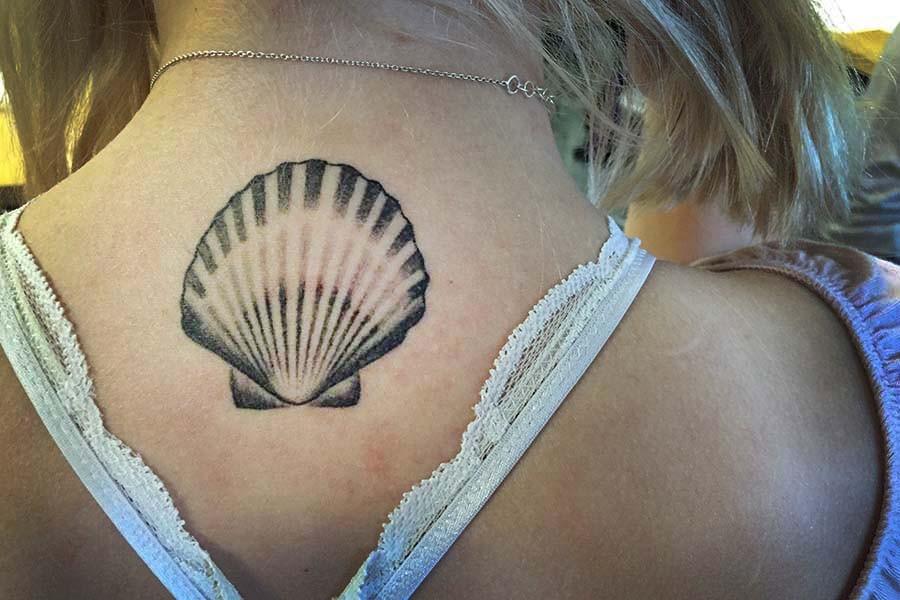 One of many of Gail Johnson's '16 tattoos, located on the back of her neck.

Senior year is one of the most influential years of a student’s life and for most, it’s the year of becoming an adult. As students turn 18, they are given new opportunities and new temptations.

Hollis Brookline High School assistant principal Robert F. Ouellette states, “Unless student’s parents grant them the right to serve as their own adult, then they will need permission from parents to leave and sign forms.” This has caused problems for some students who aren’t aware of this rule.

Many students have received detentions or suspensions for signing their own papers or leaving the school grounds. These rules, or complications in many students cases, usually drive them to take advantage of the many opportunities presented to them the day they turn 18.

One of the most exciting new perks to being 18 is the privilege to be a voter. Americans are proud of their democratic way of life and the voting that comes with. It seems to be almost an obligation for teens to vote when they reach 18, many say that they must appreciate the privilege for those who did not have it in the past.

New Hampshire high school students are required by the State Board of Education to have taken a US History class and Civics in order to meet the minimum standards for graduation. Kathy Kirby teaches both classes at HB and believes teen voters “probably know more than people double their age.” She understands that they are just as susceptible to misinformation as any demographic but trusts that first time voters won’t gather all their information from one source.

Students still in high school may feel intimidated by the prospect of choosing an elected official but are still encouraged to vote.

Kirby stresses the fact that yes, every vote counts. As an example, in the last mayoral election in Manchester, the victor won by seventy five votes, as confirmed by WMUR. With a margin that small, 18 years olds’ contribution was pertinent. There was grounds for a recount, but the verdict was the same. Ted Gatsas remains mayor, as he had held the position since 2009.

Another myth for of age for HB students is the idea that they are allowed to give consent to have blood drawn for the HB Blood Drive, hosted by the Red Cross Club. Heidi Foster, English teacher and head of the Red Cross Club, that runs the drive, says, “Parents must co-sign the permission slip for students to give blood regardless of their age.”

This rule has been put in place a few years ago to ensure safety for students.

Speaking of needles in skin, one opportunity that 18 years olds are allowed to partake in is getting tattoos without parental consent. Kids who wish to get tattoos often receive them as an eighteenth birthday gift to themselves. For students at HB, the dress code does not prohibit tattoos or body piercings, allowing some students to truly express their style.

Gail Johnson ‘16, has gotten two tattoos since her eighteenth birthday in October. Overall, she said that she got quite a lot of questions about them the first week she had them, but both students and faculty have been “supportive and kind about the designs.” For senior Shelby Bent, she received a harsh comment from a teacher about how she may regret the tattoo and should not have made the mistake, but Bent loves her tats and was not affected by the remark. “I’m glad the school lets me be myself,” she told the CavChron.
There are lots of changes for an eighteen year old high school students, and most come together to make the senior year experience.  Still, HBHS ensures the safety of all of its students but also keeps in mind the new rights and regulations society presents to them.