Glitches and Anti-Glitches in Magnetars 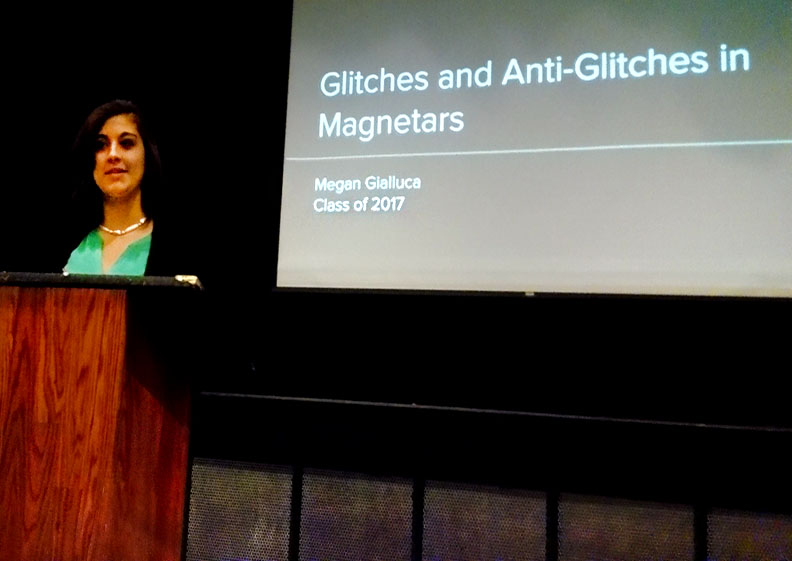 When Megan Gialluca was a little girl, her father, Anthony Gialluca, and her father’s friend, Tod Miller, would take her out during clear, star filled nights to gaze up into the night sky. The two men would bring a telescope with them and point out the different constellations for her to see. As time passed, Gialluca would occasionally look up at the stars and just wonder what is going on up there. Her curiosity then sparked an interest that gave her the motivation to pursue astronomy into greater depths.

In the process of pursuing her passion, Mrs. Heaton, the librarian, informed her of several astronomy scholarships that Gialluca could potentially apply to. After some thought,  the scholarship she ended up choosing was the National Young Astronomer Award.

The scholarship required Gialluca to develop her own hypothesis about any subject in astronomy. Gialluca, first decided to take the approach of proving there’s other life forms, extraterrestrials, existing in space. One of the Astronomy Professors she collaborated with suggested taking a different root so that she would stand out more because that topic is quite common.

Hours upon hours of arduous research eventually led Gialluca to her new topic; glitches and anti- glitches in magnetars, which are the most magnetic object in existence. Also, they are a type of neutron star with an extremely powerful magnetic field. The magnetic field decay powers high-energy electromagnetic radiation, particularly X-rays and gamma rays to emit. For those who did not attend the presentation on Tuesday, November 30 glitches and anti-glitches relate to the acceleration of magnetars.

Gialluca shared her hypothesis on the subject, stating “I propose that a high-intensity radiation-hydrodynamic outflow is causing the speed up [of superfluid].”

“This hypothesis is based off the fact that the magnetars superfluid is always spinning slower than the crust, and the glitch is caused by an internal force” concludes Gialluca.

Throughout the three months it took to complete the project Gialluca says “I could not rest. I could not sleep. I couldn’t think about anything else until I figured how, and why it [glitches and anti-glitches] happened.”

If Gialluca receives the scholarship, she plans on using the award money towards college at Arizona State or Northern Arizona University to become a doctor of science by getting her PhD.