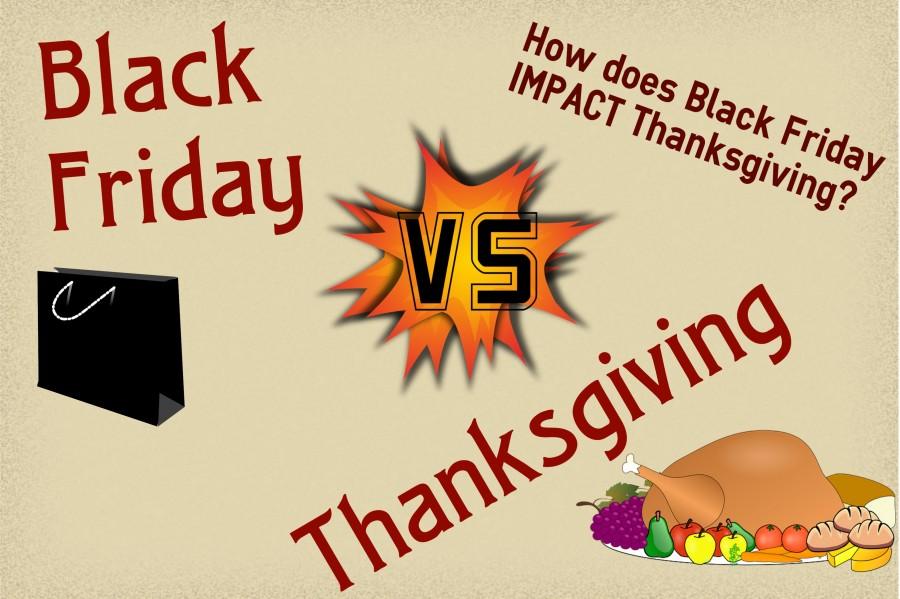 With consumer economics so prominent nowadays, Black Friday and Thanksgiving are both competing for attention from American people. With Black Friday falling on the day after Thanksgiving, some families find themselves having to pick between an early jump on Christmas shopping or spending time with their family. How is Black Friday affecting Thanksgiving, if at all?

What do HB Students think about this?

Almost forty HB students participated in a poll on two specific questions related to the Black Friday and Thanksgiving.

From the data collected, we can gather that many people who appreciate Thanksgiving as a time for family refrain from shopping or going out on the day of. However, these are the consumers.

Sarah MacEachen ‘16, an employee at Toys “R” Us/Babies “R” Us, has worked on both Black Friday and Thanksgiving before. However last year, she worked at a much smaller store in the Merrimack Outlets, so it wasn’t such a daunting event.

“[I’m] nervous [about working Black Friday] because I know how busy it can be,” says MacEachen, “We have lots of sales that are going to draw people in and I know that the atmosphere is going to be a little crazy.”

MacEachen as well as her mother and sister are all working on Thanksgiving, so their family won’t be having dinner together on the day of. “It really doesn’t make much of a dinner with just my brothers there,” she says, “They just kind of wander around the kitchen wondering how [raw] food becomes edible.”

Overall though, MacEachen isn’t deeply affected by working on these two holidays.

How do the shoppers use Black Friday?

However, he can also see the other side of the argument.

“To bounce off what I just said, Black Friday can be a good time to stop stressing out about holiday shopping and just get everything out of the way,” says Carr, “Items in shops are being swiped for very good deals, versus having to pay full prices.”

Do corporations cause a devaluing of Thanksgiving?

For a major corporation, Black Friday is a day of blowout sales and hurried customers, rushing to find the best deals. It causes huge amounts of stress on working employees. However, some corporations are working to minimize the amount of pressure and maximize the time spent with family on Thanksgiving Day.

Toys “R” Us is one company that has an exemplary procedure. Rob Hallivay, manager of the Nashua location, says that all minors who work there leave an hour earlier than others. He also ensures the safety of all employees with security guards and other measures.

He said that Black Friday does devalue Thanksgiving, but he’s glad the higher ups haven’t changed the times for Toys “R” Us. Staying open on the holiday allows him and the other employees to work shorter shifts on Black Friday to fulfill the same number of hours.
To answer the question “Does Black Friday devalue Thanksgiving?”, even a manager says yes, but it is more beneficial to the employees and the shoppers to have this massive set up the way it is. It’s less stressful and gives time for a family Thanksgiving dinner, or in Hallivay’s case, lunch.