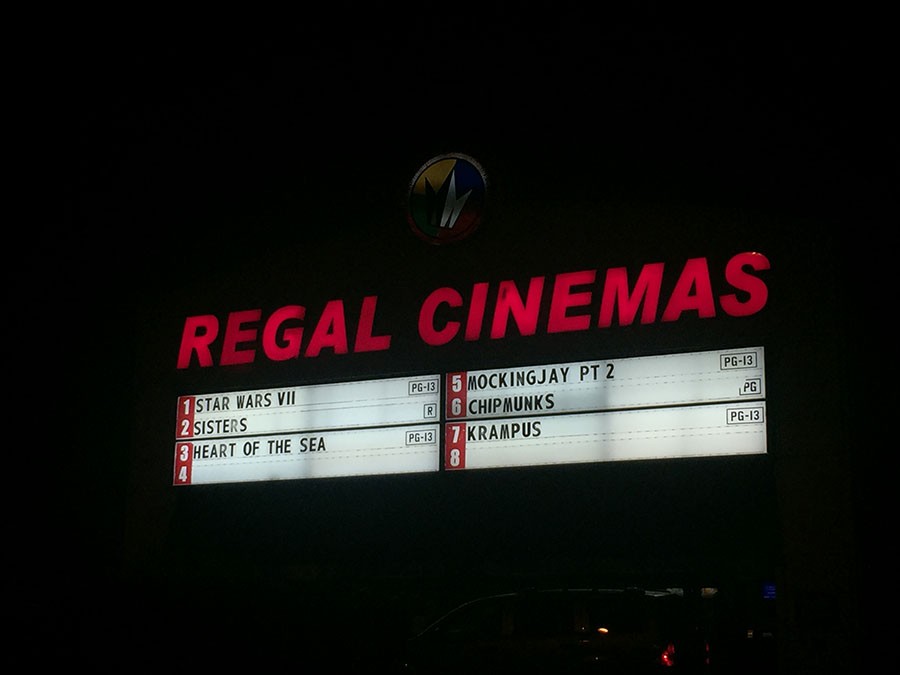 The sign at Regal Cinemas in Hooksett, NH on opening night of The Force Awakens.

Those hesitant to put their faith in JJ Abrams’ Star Wars: The Force Awakens shouldn’t be concerned in the slightest. After the second trilogy was released in the early 2000s and failed to live up to expectations, it was imperative to the franchise name that The Force Awakens succeed both story-wise and in the box office.

The film opened on a strong note, pulling the viewers into the story within minutes. A cast of well-developed characters is to be expected of JJ Abrams’ work, most notably the 2004 TV award winning series Lost. Quickly the audience knew the motives of the main cast and that can be attributed simply great writing. The only questions I left the theatre with were the ones we as viewers are supposed to ask which was nothing more than a result of smart production. There were no glaring plot holes that left me frustratingly confused, like those that riddled the prequels.

There was no lack of surprise and action in the entire 136 minutes that The Force Awakens ran, which can be partially attributed to the inclusion of familiar faces. The story was written in such a way, however, that it didn’t depend on the cast from the original trilogy to be successful. A new generation of Star Wars has emerged.

Abrams did not fail to deliver to the best of his abilities. The film was more an extension of the original trilogy than anything else, especially evident in the use of practical sets and effects rather than CG. Despite the lack of digital effects, the film techniques used brought life to the universe that George Lucas once envisioned.

With the help of an extraordinary film writer, the mind of a creative genius, and the influence of a multi-billion dollar production company, this film rose to and surpassed its true potential.