The Debate Team: arguably the best 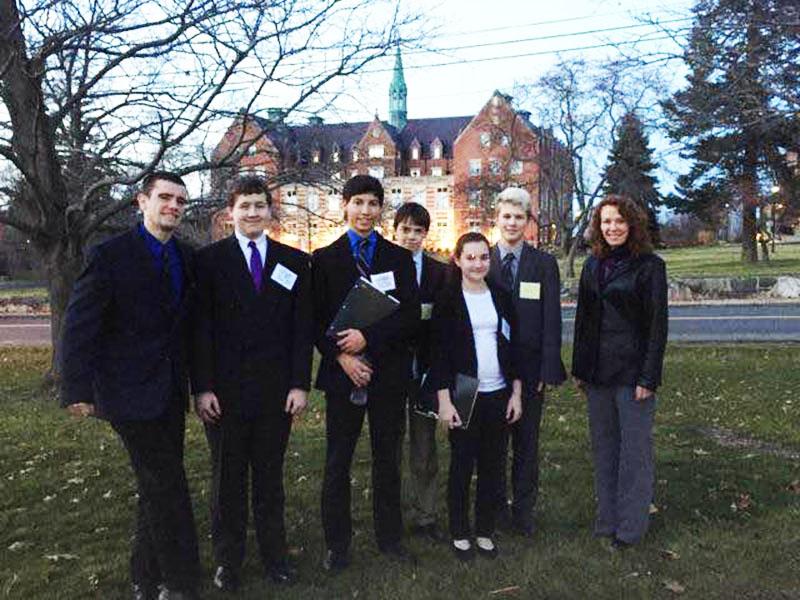 For three consecutive years, the Hollis Brookline Debate Team has participated at the St. John’s Prep Model UN Conference — and they have excelled despite the challenging competition they face. Every year, this conference attracts over 500 students from New Hampshire, Massachusetts, and Connecticut. The conference tends to be difficult, as only the best debaters from the region partake in the event. On Saturday December 12, the HBHS Debate Team travelled to the conference.

A member of the Debate Team, Skye Jacobs ‘17, received recognition from the Cold War Space Race committee, a group of students who simulat various events that took place in history.

The goal of the Cold War Space Race simulation was to have one side — The United States or Soviet Russia — reach a resolution to the Cold War and send a man to the moon. Jacobs played a large role in the United States’ side, as he helped direct their motives within several different aspects.  For this, he received an honorable mention for best delegate in the simulation.

Jacobs is proud of his team for working hard at the Conference.

“At the conference, you act as a certain delegate,” Jacobs said, “I was assigned to be a delegate in a simulation of the Cold War this year. As a group, we had to argue and work toward a resolution for the topic we are given.”

The Debate Team meets every Wednesday, During which they discuss current events and issues such as social security, medicine and foreign affairs. “We take on a specific persona,” said Colton Mailloux ‘17, “We take a stance on a topic. We also are assigned certain countries to research during the meetings. You learn a lot about the different stances of each country and you basically back up their beliefs when you discuss with the group.”

Kathy Kirby, the Debate Team’s advisor and Social Studies teacher at HB, speaks highly of those who choose to participate. “I believe our team does well because they really encourage and support each other during the weekly meetings. They make it fun, yet they learn a lot,” Kirby said.

Members of the debate team, including Mailloux and Jacobs, believe joining this club enhances not only their ability to speak publicly, but their ability to think on the spot. Mailloux recommends anyone who enjoys history and current events to attend future meetings.

“We don’t necessarily compete with one another. We are here to have fun,” said Mailloux.

Kirby is excited for the future of the Debate Team. “An interesting component to this conference is that they invite middle school debaters to join in,” she said, “I would like to see our middle school team join in next year as well.”
For more information and to learn how to be involved in the HBHS Debate team, you may contact any of the club members or the advisor, Ms. Kirby.