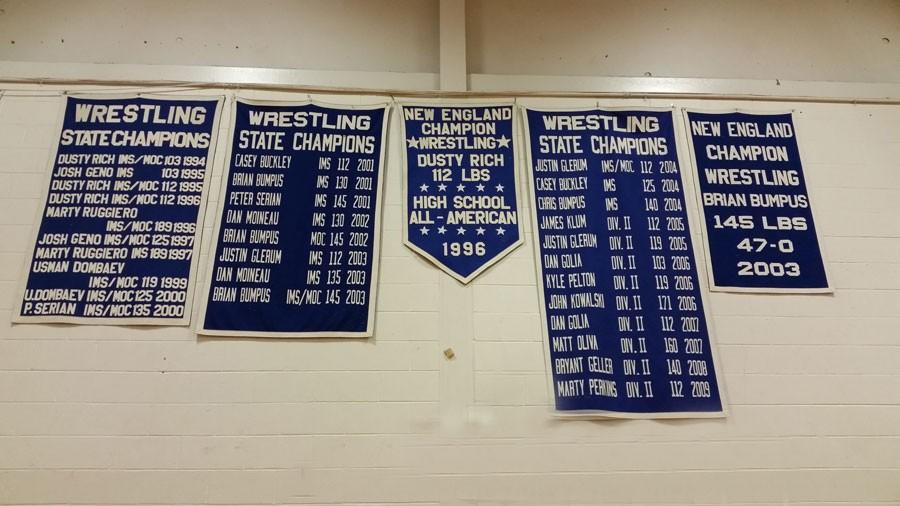 This year's team, featuring seven returning seniors, looks to continue their recent success and add to the collection of banners in the gym.

As the winter season approaches, Hollis Brookline’s wrestlers are preparing for their upcoming season.

There are high expectations this season, for the team as a whole as well as individuals. The team has been the Division II champions for three of the last four years, and they hope to win it all again this year. As one of the top teams in the state, HB feels that they have a good chance.

“This is our year to win it,” said Garrett Klausner ‘16. Success isn’t a guarantee though, as the team has some missing pieces from last season.

“We need to fill holes [if we want to win the championship]. We lost three seniors, including division champ Andrew Butler. The younger guys will need to step up,” said Coach Brian Bumpus.

When asked what the Cavaliers need to do to succeed, Wyatt Farwell ‘16 said,
“We’ve just got to do what we always do. It’s a long season. We need to stay focused and stay on the grind.”
HB will be calling on their seniors to lead the team, in terms of both leadership and success. When asked who he was counting on to lead the team, Bumpus replied, “Our seven seniors. They each bring something different to the table.” All seven seniors have placed in the top five at the state meet at least once, and Kayne Robert and Caleb Lomme each finished first at States last year. With the depth they show, HB is primed for a big run again this year.

After a scrimmage in Londonderry on December 2, the varsity team will have their first meet of the season on December 5, in St. Johnsbury, VT. After that, they have eighteen more meets until Division II States. For those who excel at States, the Meet of Champions comes next. The Cavaliers are primed for a big season, and are ready to put in the work they need to for success.