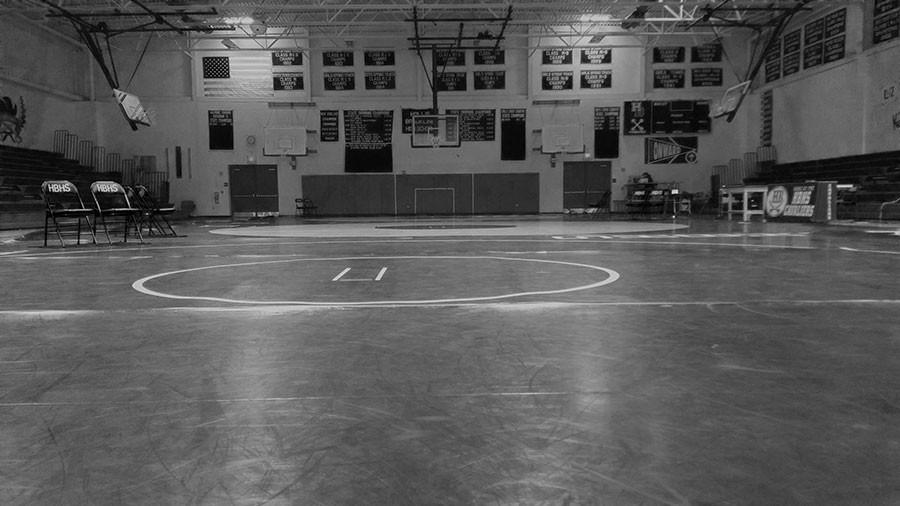 The scene in the HBHS gymnasium prior to one of this year's home tournaments.

Wrestling is an extremely tough sport, both mentally and physically. It’s all about which wrestler has the strength and the endurance to last six minutes on the mat or pin his opponent. To the untrained eye, wrestling just looks like two kids crouching in the middle of the matt trying to tackle one another. It’s much more than just that. There is a lot of technique and strategy involved in the sport. Wrestling looks extremely complicated to someone who has never wrestled before. There are lots of rules and guidelines that you have to follow.

Let’s get onto the wrestling. There are two ways to defeat your opponent: either by pin or by scoring more points in the match. A pin is where one wrestler holds his opponents’ shoulder blades on the matt for two consecutive seconds, this results in an automatic win for the wrestler. A wrestler can also win a match by scoring the most points. There are multiple ways to score points such as a takedown, which is when a wrestler is in full control of another is worth, two points; an escape, which is when a wrestler gets free of another wrestler’s control, is one point. The list goes on. You can also score points if the other wrestler uses an illegal move, unsportsmanlike conduct, unnecessary roughness, etc.

Wrestling can be extremely complicated. Once you have managed to wrestle or have watched wrestling for about a year then all these rules will make sense.

Wrestling isn’t for everyone. For some people, it can be very uncomfortable. It takes a lot of will, heart, and determination to go through a season of wrestling. In the end, it’s all the hard work that will get your man up on the school banner. That’s why we wrestle.