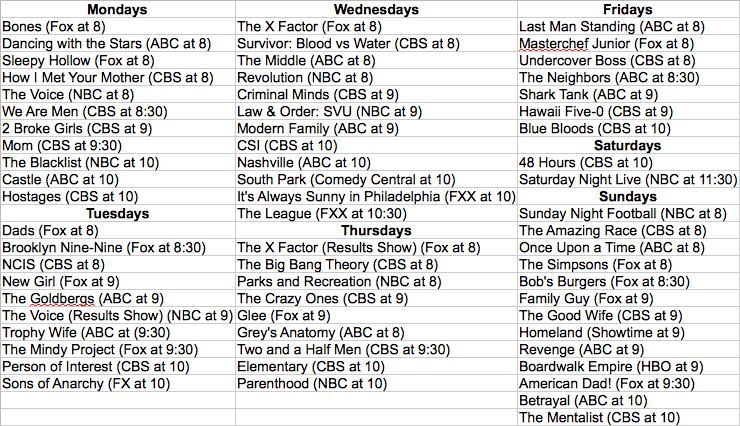 Along with the juicy apples, ripe pumpkins, and colorful leaves of fall comes another exciting staple: a new season of television. Returning favorites such as New Girl, Awkward, and The Big Bang Theory are back with new episodes, as well as some brand new series.

Some fan favorites at HB are back with all new episodes. How I Met Your Mother returned to TV for its ninth and final season on Mondays at 8 pm on CBS. As a consistent favorite at HB, many students don’t want to see it go. Meghan Philpot, ’14 said, “I’m so excited for How I Met Your Mother, but I’m sad that it’s ending.” Another fan favorite is New Girl, which airs on Tuesdays at 9 pm on Fox. Jessica Ciarcia, ’14 said, “I’m so happy New Girl is back because it’s the funniest show!” As well as returning shows, some new shows will be beginning this fall. Some include Brooklyn Nine-Nine, starring Andy Samberg on Fox, and Mom, starring Anna Ferris on CBS.

Aside from comedies; reality shows will be returning to the small screen, and singing competitions are a favorite at HB. Mr. Illingworth, math teacher, said, “I like The Voice because it’s a very supportive environment for the singers, as opposed to The X Factor where Simon likes to put people down for entertainment” Other reality shows that are returning include Dancing with the Stars and Survivor.

If the Emmy’s are any indicator of what this season has to offer, Modern Family and American Horror Story will also be successes this season. If nothing else, the Emmy’s have brought about a sense of excitement for the upcoming season of TV.