Looking at life through a different “I” 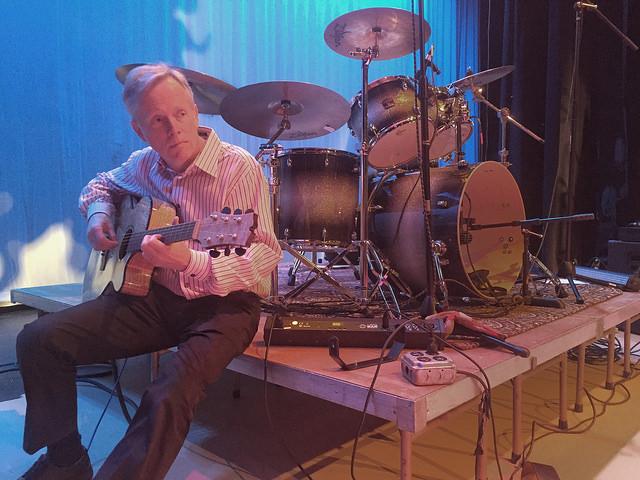 Life, at times, can be looked at like a kaleidoscope or even a lighthouse. That means that from wherever you stand and peer out, it may be different from someone else’s perspective. Therefore, no single life is the same as another. For Hollis Brookline math teacher, graphic design expert, and guitar night enthusiast Mark Illingworth, life gets all its worth and value when he gets the chance to make it his own.

From childhood on, Illingworth always had the idea in his mind that he needed to stretch himself in every way that he can. In elementary school “no one ever told [him] that he was creative, so [he] had to come up with that idea on his own” (Illingworth). That’s when he began to pick up the concept that his life needs twists and turns to make it special and unique.

When Illingworth was only twelve years old, he took a trip to an authentic wild west themed town in New Jersey. In the woods surrounding the town, fake stagecoach robberies were performed and Illingworth gave himself the idea to stop one.

He waited where the robbery usually occurred, grabbed the arm of the supposed burglar once he arrived, stopping him and thus terminating the hold up. But that was it. It wasn’t about being able to say that he stopped a robbery, or to impress the people who were watching, but to just have the experience under his belt for personal gain.

Once, in high school for a Spanish project, Illingworth gave a presentation to his peers about Oreos, and decided that he would dress up as the Oreo Middle Man, simply because he could.

Ever since the idea to go the extra mile was presented to Illingworth, he used it whenever he could. Illingworth says that “stretching yourself is always worth it…because when you add it all up, that is who you are in the end.”

From then on, Illingworth joined camps that sparked his interest and learned how to do certain activities in order to obtain the joy that they could give him. He spent a week at mime camp in his thirties, attended both singing and improv camps, and even learned how to Journey Dance. Taking this class at the Kripalu Institute allowed him to get his inner emotions out, and he connected so strongly with it that he proceeded to learn how to teach the class himself.

With expanding oneself comes the great release of overcoming certain fears and widening horizons. Whether it be by singing for a crowd for the first time, or just putting on a homemade costume to make people smile, Illingworth has become the master of directing his life towards personal happiness.