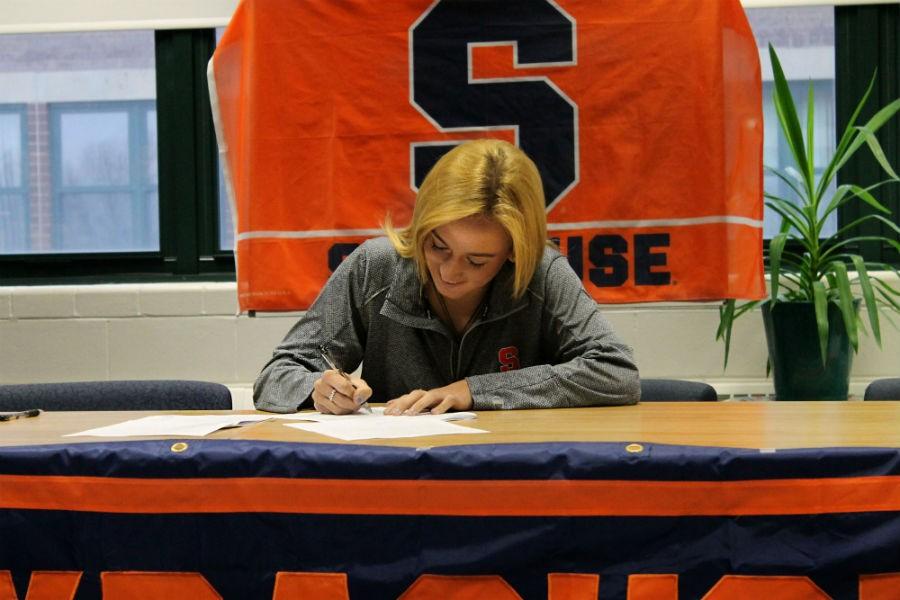 For Sydney Brackett ‘16, playing soccer has always been an escape. For as long as she can remember, she’s been out there on the pitch, scoring goals and enjoying the game that provides her with, “the one place [she] doesn’t have to worry about anything”.

Starting at the age of six with organized town teams before moving onto club teams at the age of eleven, Brackett found her soccer career really starting to get serious as she began to attend private schools and play for the FC Stars, a high profile club team based out of Massachusetts.

According to Brackett, with national ranks, constant travel and grueling practice schedules involved, a lot of people view the recruitment and committing process as very stressful one; but not her.

“I’ve never really thought of it like that,” she explains, “it’s always been more of my escape from the stressors of growing up and being a teenager.”

Even as she moved between multiple high schools, Brackett’s passion for soccer remained unbreakable. No matter the people or location involved, “it’s always been the one consistency,” she says.

As a result of her tremendous hard work in training over the past four years, Brackett has finally reached one of her main goals of committing to a college with a top soccer program. When asked about the accomplishment, the #17th ranked forward in the nation described the moment as, “surreal”.

On February 3rd in the HBHS library surrounded by friends, family, and past coaches, Brackett officially signed her commitment papers to attend Syracuse University and play as a part of their Division I Women’s soccer team.

As soon as graduation passes on June 11th, Brackett will officially start her career training with SU. As the rest of the school and her fellow graduates settle into the relaxed vibes of early summer, Brackett will be on her way down to Syracuse, where she will spend the following two months living in a dorm, working out with her trainer, and preparing for the season to begin.

On behalf of the entire CavChron staff, we congratulate Brackett on her incredible achievement and wish her all the best on her future soccer endeavors at Syracuse and beyond.