Congrats you’re in! Now what? 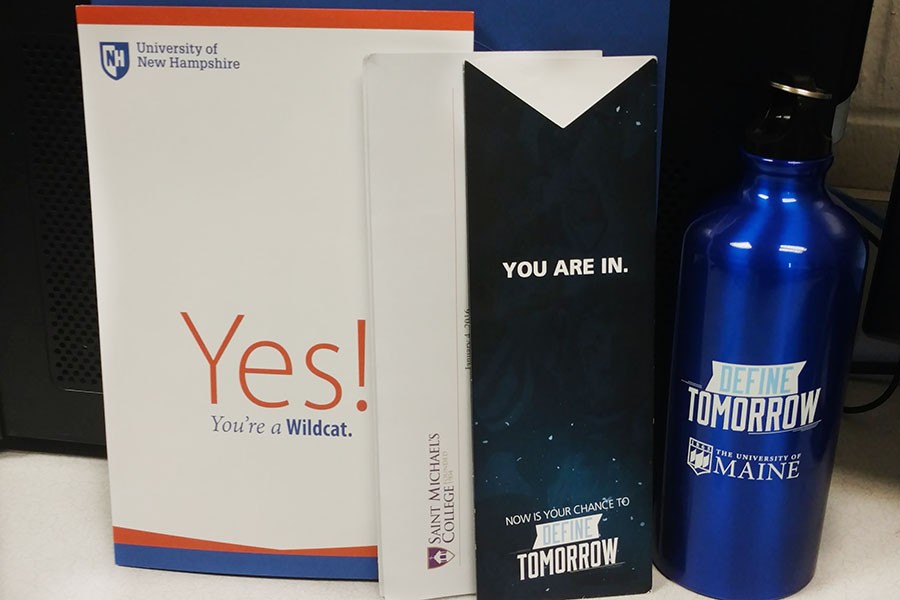 The college decision is sometimes made even harder with "swag " sent to the student by the college.

If you’re among the students who have already been accepted into several colleges, how will you decide which college is number one? The decision is a difficult one. How does a person decide their future career let alone where to spend the next four years? There are innumerable factors to take into consideration while making such a life-changing decision.

Joshua Scali ‘16 was accepted and committed to the Rensselaer Polytechnic Institute (RPI) as they have his intended major, Nuclear Engineering. When Scali took a special tour there, he had the opportunity to talk to a professor of his major. Between talking to the professor and spending time at the college, it solidified his decision.

A vast amount of businesses offer a multitude of internships at RPI, “I saw an opportunity [at RPI]” Scali stated. Internships are a very important experience in the field of study one is planning to major in, it is best to get them as early as possible.

While for Rachel Jiang ‘16, Boston University had a great balance of STEM programs and art, both of which are very important to her. “I just knew it was the one” Jiang says “The fact that they had an improv program made me want to cry.”

Angela Harrow, a graduate of the class of 2015, says “It sounds lame and everybody says it, but a lot of it [the decision-making] for me was kind of just my initial feeling of the campus. I ended up choosing Arcadia [University] because when I visited, I definitely liked it and then I kept coming back to it and looking up everything I could[about the university].” Visiting the top colleges on your list is crucial to determining your favorite.

Harrow’s tip to those who are trying to make the difficult decision is, “Just try not to stress out too much. And in the end, it’s not the end of the world. Taking a gap year or transferring are always an option. There’s not one specific right or wrong choice here.”

To put it all together, first figure out what major you’re going into. Second, weed out the colleges that don’t have the major you’re looking for. To do this, use CollegeBoard, it can be very useful, but not always up to date on specific college information. Finally, decide whether you want to go to a big school or a small one.

Do you want to stay in a rural setting or embrace the city life? Do you want to move far away from home and be even more independent, or stay close for comfort? Another thing to think about is whether or not you’ll be able to afford to come home during the holidays if you go far away.

If you’ve already been accepted, now what? Go over your check list again. The list should include affordability, internships, work study, scholarship money, and other specific information. Finally, if everything is checked off, therefore making those schools your top colleges, remember the feeling you got when you visited. Weigh the pros & cons, and in the end, follow your gut instinct.

For an interactive map to see where some of the HB students are headed, click here