Playoffs near for Bruins 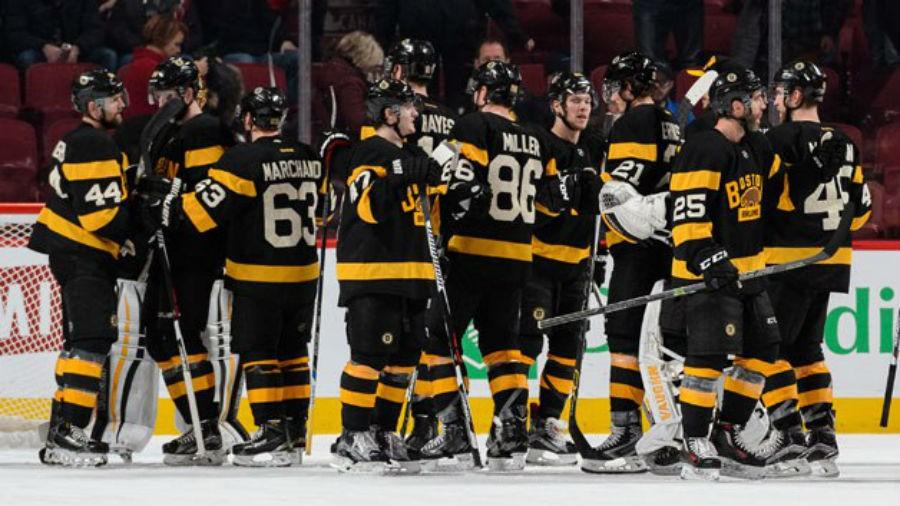 The Bruins congratulate one another following a 4-1 win in Montreal against the Habs.

Nine games remain on the 2015-2016 season for the Boston Bruins, who currently sit at second in the Atlantic Division and 3rd in the Eastern Conference for points. With a tough schedule as of late, the team has been put through a gauntlet of difficult matchups which have shown the team’s ability to play and win against good teams in the league.

With last season being the first year in seven that the team hadn’t make the playoffs, this year’s squad is determined to get back to playing playoff hockey.

So far in March, the team has achieved a 5-5 a record while taking on hot teams like the Blackhawks, Panthers, Lightning and Capitals.

Although not all of the games resulted in two points, the B’s are continually improving as they move towards the playoffs, which will begin April 15th and move into mid-to-late June.

To kick off the month, the Bruins went 2-1 on a three game homestand. In a rematch of the 2013 Stanley Cup Finals, the team defeated the Blackhawks 4-2, just two days after defeating Calgary 2-1 at the Garden as well.

Two days later, the first place Capitals came to town. Although a goal from Patrice Bergeron and 30 saves from Tuukka Rask kept them in the game through the third, the Bruins couldn’t stifle the high-powered Caps’ offense forever. Philipp Grubauer’s goal with 2:36 remaining in OT handed the B’s their first loss of the month.

Although they couldn’t come away with two points, the team captured one for sending the game into extra time.

After defeating the Panthers in overtime 5-4, the team hopped on a bus to Tampa to take on the Lightning who trail the B’s in the standings by just one point. Reminiscent of the 2011 Eastern Conference finals game 7 in Boston, the intense bout stayed scoreless into overtime.

It didn’t take the B’s long though, as ten seconds in, Brad Marchand’s tip landed the puck in the back of the net off of a sweet feed from Patrice Bergeron moving down the wing. The 1-0 win resulted in two points for the team and broadened the gap in the tight Atlantic Division.

The flashy goal, seen here, has become a sort of trademark for the Marchand-Bergeron duo and has been seen countless times over the years, most noticeably in double OT against in the Penguins in the 2013 Eastern Conference Finals sweep.

After dropping three recent games to the Sharks, Ducks and Kings on their West coast road trip, the team now heads across the country to New York for a Wednesday Night Rivalry matchup against the Rangers on NBCSN.

They face a quick turnaround after the game ,though, and will have to quickly hop on a flight back to Boston in order to take on the current first place, Florida Panthers, who they took down 5-4 earlier this month. Lee Stempniak’s goal with a minute left in overtime lifted the B’s to their 5th win in seven games.

As the conclusion of the 2015-2016 regular season nears, the race for playoff seeds has started to heat up. Big games against the Rangers, Panthers, Blues and Blackhawks will determine how the Bruins will head into the first round. If they can keep their roster healthy in the following weeks and win important games , the team will have the chance to be back in the playoffs, competing against the best teams in the NHL for the chance at a Stanley Cup title.