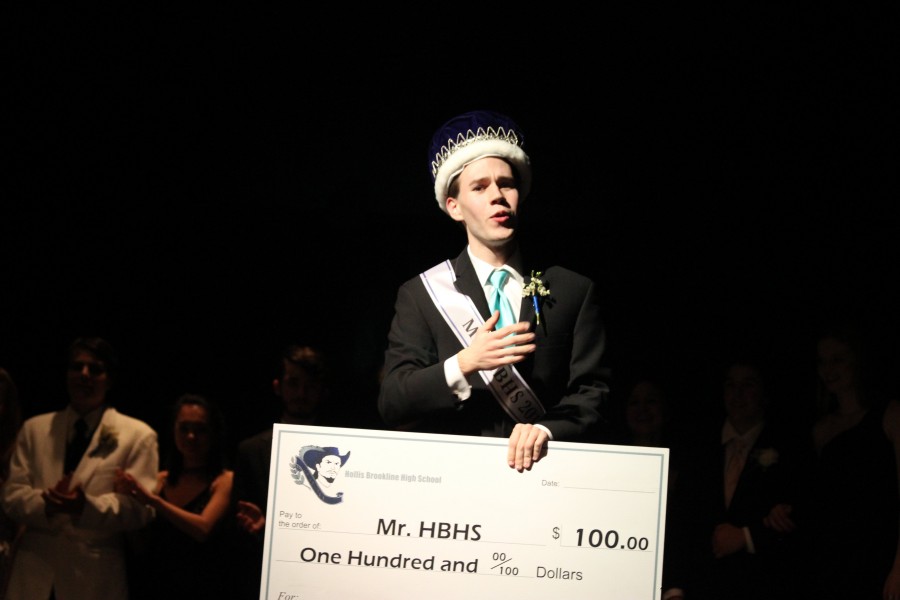 A night of tuxedos and talent ensued on February 18 with the conclusion of the long-awaited Mr. HBHS event. The Hollis-Brookline auditorium was packed with an enthusiastic audience as our handsome boys of HB danced, sang and… attempted to break world records? Although all of the contestants worked hard on their performance, Bradley Simpson ‘16 took home the title.

The night began with a musical montage and a well-practiced opening dance from our contestants. Our boys continued on to answer interview-style questions as the event’s MCs, Wyatt Farwell ‘16 and Peter Burtone ‘16, asked progressively more ridiculous questions. However, the answers were flawless as contestants handled everything thrown at them with grace and poise.

However, the ever important talent portion was the highlight of the night. Shannon Fitzpatrick ‘16, a member of the Class of 2016 Student Council who helped to organize and manage  the event comments that “The strangest talent this year was probably [Brian Delany’s 17] attempt to break the world record for number of pickles and Saltine crackers eaten in a minute.”

Fortunately for the audience, Delany was unable to accomplish his goal, but it made for quite the hilarious defeat.

Another talent of notable quality was performed by Paul Menard ‘17. He brought to the table a stunning Jedi Knight fight, inspired by the Jedi Knights in the popular Star Wars series.

The sophomore class brought comparable talent to the contest as Isaac Wimmer ‘18 blew the audience away with an original piece performed on the guitar.

By the end of the event, the MCs channeled the spirit of Miss Universe host Steve Harvey and presented Delany, in all of his pickle-and-cracker eating glory, with the crown of Mr. HBHS alongside a check for $100. Celebration ensued… but not for long.

Just as the other contestants began to accept their loss and congratulate each other for a job well done, the MCs announced that they, in the words of Harvey, “have made a mistake.”

It was clear to many that Simpson, alongside his escort Takuma Okada ‘16, deserved this title. Yet all of the contestants graciously joined together in one last dance, an encore of their opening dance, to bring the night to a cordial end and successfully raising money for the senior class’ year-end activities.