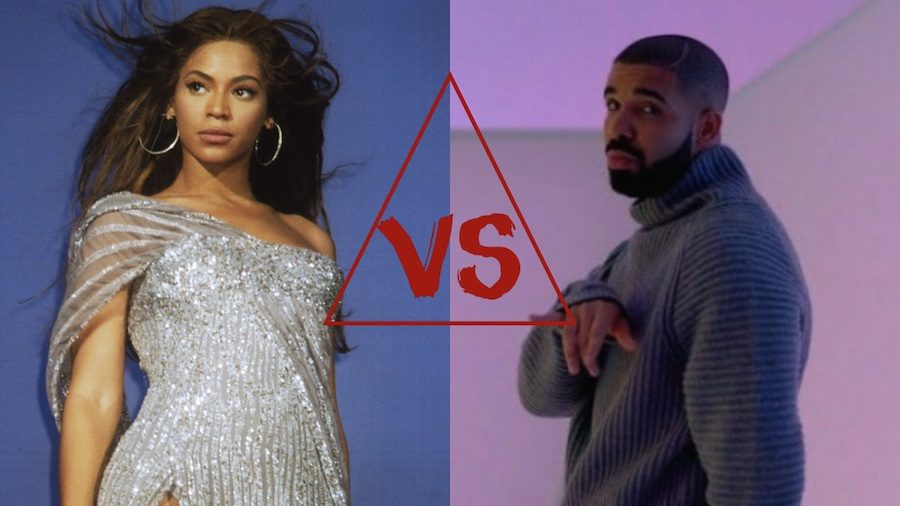 Who's album will come out on top?

The last week of April proved to be one for the ages to any music aficionado out there. On April 23 singer Beyonce Knowles released her new album Lemonade, shocking the globe with her revealing lyrics and beautifully crafted hour-long visual album. Six days later rap artist Drake followed up with his newest release, Views. Containing twenty songs and featuring seven artists, Views has also been considered groundbreaking.

Both records have had a major impact on their audiences, and the competition for the top seller has been a tight one. So let’s break it down:

Lemonade was originally released on Tidal and HBO Go until April 25 when it was made available for purchase on iTunes for $17.99. It was taken off of HBO Go the next day. When Drake released Views, it was only playable on Apple Music for the first week, causing much distress for Spotify and Tidal users as they were not able to access the new songs without an account. The 20 track album is now available on iTunes for $13.99.

As of now, Drake has come out on top, with the number one album on the iTunes Top Charts list, selling 600,000 copies in the first 24 hours. Lemonade is right behind him in second place.

Views boasts a wide variety of artists including R&B singers Rihanna, Kyla, and rapper Future, giving it a very lively feel from song to song. Similarly, Lemonade features popular performers The Weeknd and Kendrick Lamar, touching multiple genres as the tracks play out.

What really got Beyonce fans, known as the Beyhive, going was not only her powerful lyrics and controversial topics such as her relationship with her husband, rap artist and producer Jay Z, but the one-hour-and-five-minute visual album that had its world premiere on HBO on April 23 to kick off the album’s debut. The visual album contained every song on the disc presented as a music video by Beyonce herself. According to TV By The Numbers, Lemonade drew in 787,000 viewers ranging between 18-49 years of age.
I took to Twitter and asked people to vote which album was their favorite, and Views was declared the winner after the 24 hour poll expired and the 114 votes were tallied.

With both albums making blockbuster sales in only a few weeks, it is no doubt that Drake and Beyonce have a successful year ahead of them. Both stars will be on tour during the latter part of 2016, so you can check out Beyonce at Gillette Stadium in Foxborough, MA on June 3 and Drake at TD Garden in Boston, MA on August 10.