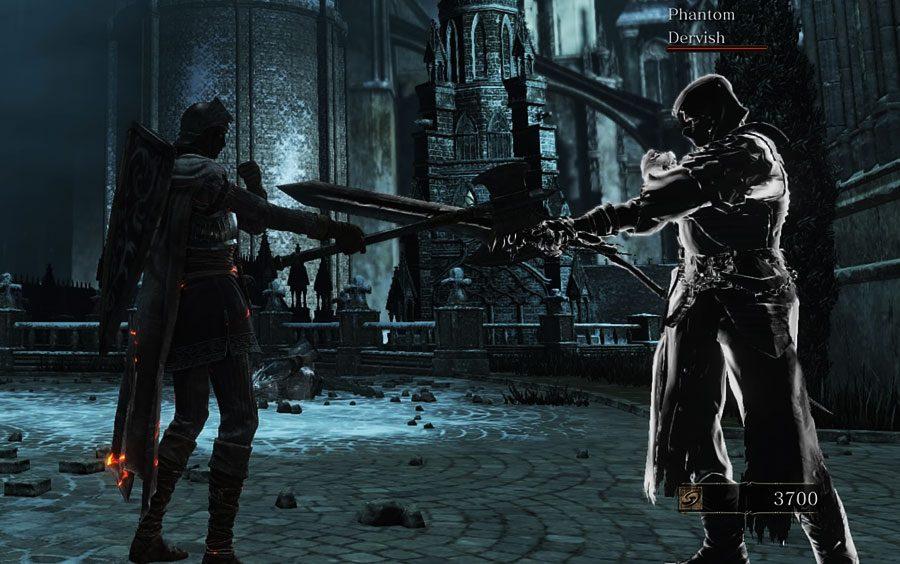 I loved the first two games in the series Demon’s Souls and Dark Souls, two outstanding games that treat users like adults and don’t hold your hand, like many other video games these days. Dark Souls II, or DS2 for short,  retained some of this but mostly due to enemy hitboxes extending at least ninety percent farther than the actual weapons model. Bloodborne, another game in this series, tried to do something different. At the same time, though, its attempts to appeal to the fans of the series made it a very confused mess of a game. Then Dark Souls III came along and took maybe a few too many cues from Bloodborne.

The game starts out relatively strong with the first tutorial boss, showing a boss in armor who then transforms into a hideous monster in order to trick players into thinking it was going to be like bosses from DS2, which had too many bosses that were just tall men in armor. It was a fun moment that gave me hope for the rest of the game. A lot of bosses that were in armor worked like this, being very beastly at the same time or having a unique gimmick. Being fair to DS2, it had nearly twice the bosses so it had more good bosses, but a higher bad boss ratio. This game, on the other hand, has few bad bosses per say, but a ton of annoying ones that are very frustrating for the rather baffling way which this game’s equipment mechanics work.

So here’s how it goes: poise still doesn’t matter, just like in DS2, but at least their heavy armor is able to absorb damage. In DS3 however, the armor’s stats matter slightly more than in Bloodborne, which means it is a struggle to even notice if you are taking less damage. This wouldn’t be so bad if the weight system dictating the quality of your dodge roll wasn’t back, too. On top of that, shields have difficulty blocking the very Bloodborne-esque bosses’ hyper- aggressive attacks so basically the best option here is two handing a weapon then equipping the stamina-regenerating Grass-Crest Shield and then armor that doesn’t compromise the fast roll. In other words don’t worry about defending just dodge attacks. This makes around half of the games’ armors almost completely pointless unless a ton of levels are wasted in vitality, the stat that allows players to wear heavier gear, which I’ve done on one of my four playthroughs. I had fun but there were several occasions where I had to switch to light armor and roll.

Now onto the multiplayer, the bane of any Souls game past DS1. The reason it has become such a problem is because of the expansion of the community since all new players don’t know the established rules of the community it all fell to chaos. The amount of times that dark spirits are forced to face ganks is absolutely absurd. A gank is when multiple phantoms gang up on an invader with the host. Every player in a world that isn’t the host has their healing Estus flask count cut in half making, it also very easy to stall out an invader with Estus. The normal number of summons allowed is two, with one invader but with the dried finger item that will go up to three phantoms and two invaders. The problem with dried fingers is that it doesn’t queue up to invaders to invade the world at the same time, so it’s almost always a four-on-one and that’s if the host doesn’t have the way of the blue covenant. Unlike in previous Souls games where a player is only aligned to one covenant at a time in Ds3, the player receives an emblem to equip to themselves at any time. That allows the way of the blue covenant to be used whenever you get invaded. The way of the blue does one thing: it summons a blue sentinel to defend a player from invaders which is a nice concept until it’s added to the other phantoms that are already there (though it can’t exceed the three phantom limit). Then mad spirits that are against everyone appear and will get rewarded no matter who they fight. So what would their motivation be to help an invader instead of the host? They have none except for maybe morals. Now it’s a five versus one situation. Lastly the host can now use a seed of a tree of giants to make all enemies in the world hostile to invaders as well as themselves. Now everything is stacked against an invader who just wants a fair one-on-one duel without any annoying stall. Also, invasions prioritize sending invaders to worlds with phantoms which is good on paper, but terrible in practice. In DS2 the best addition was the video game element the first game lacked. One was a dueling arena where two dark spirits could face off without Estus recovery but DS3 apparently decided that wasn’t needed.

Another one of DS3’s flaws is that it solved very little of the series’ longstanding problems such as PVP (Player vs Player) balance. Although it did not make dark magic overpowered finally. But this is by simply having very little of it in the game.  Sorcery is still the same: weak in the beginning and super strong at the end. Pyromancy is still strong throughout. Miracles are unfortunately still weak from the Ds2 nerf, a change to a game that makes something less effective or desirable, that seemed to carry over to this game. That is another of FromSoftware’s weak suits; whenever they discover something is overpowered they either leave it alone, nerf it by an inconsequential amount or nerf it to the point where it is completely useless. That basically means they have literally no idea how to properly balance the game.
Now all of this said, is Dark Souls 3 a bad game? No not really. It was still a lot of fun to play (more so than Bloodborne), but I feel that is less due to its merits and more to do with its legacy. I’ll tell it to you this way: I beat this game for the first time with the exact same weapon I used to best DS1 for the first time with armor and a shield that also appeared in that game first. If you are a fan of the Call of Duty series, you’ll know the feeling. There were two amazing games then every game after them was good but not as good so they feel like they are getting worse because you expect more from a sequel, as you should. This mainly comes from the frequency of the games; they come out once a year. In contrast, none of the Legend of Zelda fans are tired of the formula because Zelda games only come out every four to six years, giving fans a decent break. This game felt like it should have been condensed into a DS2. DLC(Downloadable Content), which lead to the endings of this game because very little of this game isn’t just the series repeating itself.