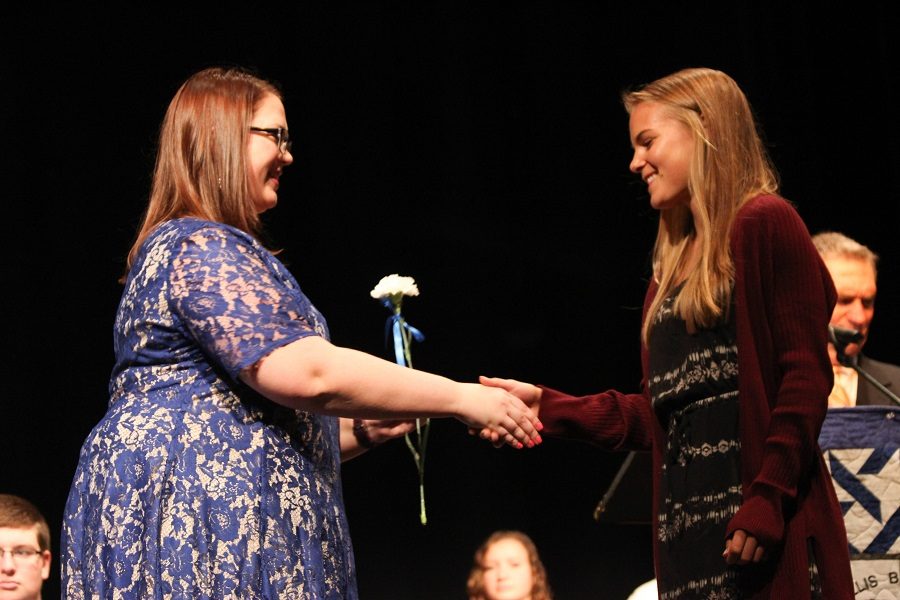 This year’s new National Honor Society members were inducted Thursday, October 20. The ceremony was held, as in past years, in the Hollis Brookline auditorium with refreshments in the back lobby afterward. The inductions proceeded smoothly, and everything went as planned.

Every year, as part of the ceremony, the NHS officers conduct what is known as the “Candle Lighting Ceremony.” Each candle represents a different value of NHS, known as a pillar. The pillars are Scholarship, Service, Leadership, and Character, which are each lit by an officer. The ceremony resembles a promise made by the group to commit to each of these values, and to honor them throughout their membership.

The inductees know the responsibilities that come with the honor of being an NHS member. The group gives back to the community on a regular basis with community service and chapter project participation .

“NHS is a great chance for me to be recognized for things I already do, and it gives me more opportunities to continue doing some of these things,” said new inductee Scott VanCoughnett ‘18. Hannah Thomas ‘18, also a new inductee, described NHS as “a group that portrays exemplary student characteristics and habits such as academic success, community service, and leadership. It’s a privilege to be accepted.”

This year, the National Honor Society will be sponsoring and contributing to the End 68 Hours of Hunger Chapter Project. According to their website, the program is a “private, not-for-profit, effort to confront the approximately 68 hours of hunger that some school children experience between the free lunch they receive in school Friday and the free breakfast they receive in school Monday.” All NHS members, new and returning, will be donating time and possibly food or money to the cause. On Saturday, October 29, there was walk-a-thon here at the HBHS track. Each member collected sponsors and raised money by walking or jogging laps around the track, even with the rain.

Check out pictures from the NHS Induction Ceremony above.