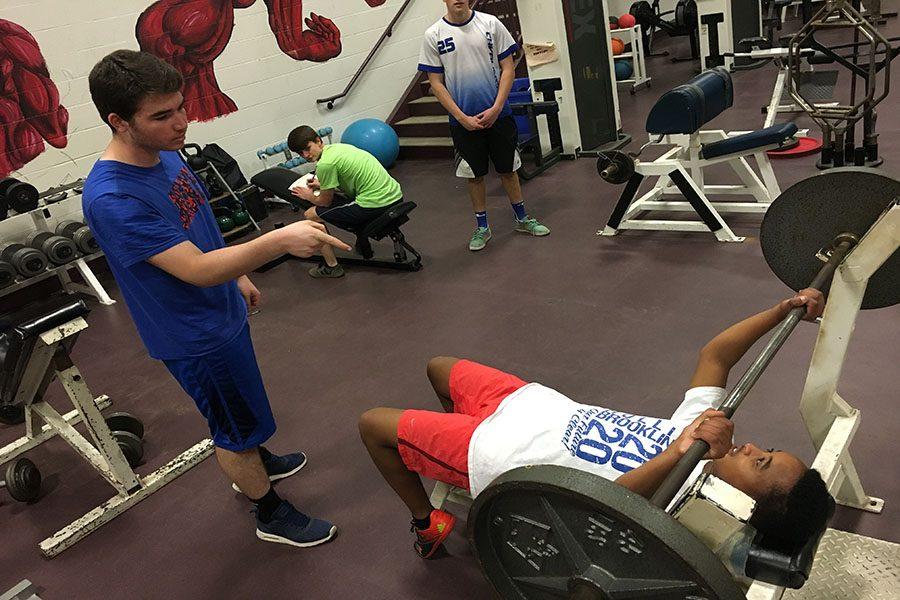 Senior Evan Sutton coaches Freshman Cooper Murray on how to do a chest press.

In the past, freshmen at Hollis Brookline High School have said they were afraid of seniors. As middle schoolers come up to the high school, meeting new people in new surroundings can be quite scary. This year, the freshmen couldn’t be less intimidated by the upperclassmen. They are not afraid of being judged by seniors and have made it a point to let the seniors know that they are not worried about what upperclassman think.

According to a poll of the freshman class, current ninth graders aren’t as afraid of seniors as people have thought in the past. Owen Scott ‘20 stated that he was a little nervous, but now he likes the seniors, adding  that the seniors are “just kids” and no one should be afraid of them. Another freshman, Hailey Tiner, said, “Most people are taller than me already.” Even though the seniors are bigger, she still isn’t afraid of them.

Michael Fox, English teacher, has taught at Hollis Brookline High School for as long we can all remember. He observed that senior-to-freshman bullying has changed drastically over the years due to  administration – cracking down on bullying and changing the culture of the school. The awareness of the negative effects of bullying has increased, and this has caused the upperclassmen to treat the freshmen differently. Fox said, “In smaller schools you have siblings that attend school at the same time and they can create a protective umbrella.” Having older siblings can create more of a cushion for the transition from middle school to high school and can allow freshmen to feel more comfortable around the upperclassmen.

Clubs and sports help immensely with integrating seniors and freshmen. Maren Anderson ‘20 played on the varsity volleyball team as a freshman and became friends with a lot of the seniors on the team. This made her feel more comfortable around the eldest class. Anderson said, “The seniors took me under their wing and gave me insight to what high school is like.” This is one of the ways that getting to know seniors can be useful in your highschool experience.

Over time, freshmen have learned to adapt to stereotypes that seniors have been given and build better friendships and bonds with upperclassmen. The atmosphere of the school has changed so that the seniors are a lot more accepting of freshmen, and are willing to help them with the transition they experienced all those years ago.