Behind the scenes of “Alice: Through the Looking Glass” 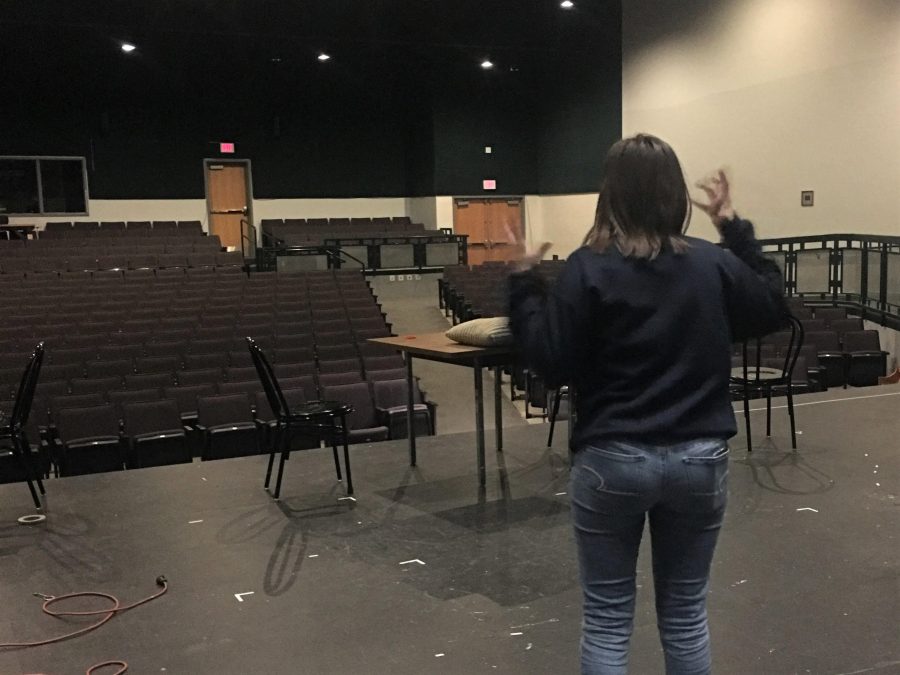 The HB community loves going to see the magical productions put on by the theater department each year. Whether it be a musical or play, it’s amazing to see friends, peers, and strangers alike onstage, making a story come to life in a culmination of countless hours of practice and preparation.

Audience members sit in awe, staring up at the stage and wonder how the actors and actresses do it. Memorizing lines and stage positions, along with developing the mannerisms of each of their characters, seems almost impossible to all non-thespians.

What theatre-goers don’t often realize is that so much happens behind the scenes of the show. Of course the actors often stand in the spotlight, but even Caroline Kroeger ‘17, who plays Alice in Alice: Through the Looking Glass, recognizes that she couldn’t have been her best without the team backstage. “The stage managers helped me learn my part. I frequently met with Paige [Gionet ‘17, Stage Manager of the show] after school and walked through my lines and stage blocking (also known as stage directions) .”

Gionet, a veteran stage manager, touched upon some of the many roles she has backstage, “We’re responsible for making sure that everyone is there and in their spots, coordinate with the tech crew and make sure everything’s going well on their end.” For this show, there are three stage managers who work alongside Gionet: Emma Schulz ‘17, main stage manager, and two Assistant Stage Managers, Maura Shanley ‘20 and Sam Price ‘20. Working behind the scenes can often be seen as a thankless job; stage managers and members of the tech crew work tirelessly to make the show a success.

Rehearsals and after school work are what make being a part of the thespian community so rewarding and enjoyable. Lauren Moura ‘17, the Mad Hatter in this original play, said that she and the cast enjoy “talking and having fun with [her] castmates” backstage, one of her favorite parts of the experience. Some people try to do their homework, but “it’s really hard to” because of the boisterous back-stage fun. Schulz added that rehearsals and being back stage is “kind of like a party, but you have to be quiet.”

The cast of Alice seemed in agreement that this show in particular is fun because of the freedom given to cast, crew, and directors. As this play is an original piece, adapted by director and history teacher at HBHS, Gregory Parker, the actors, “have a lot of freedom and get to have [Parker’s] opinion on what he wants a certain scene to look and feel like,” Moura stated.

Even though tech crew, stage managers, directors, and costume designers don’t get much time in the spotlight, they contribute immensely to the success of any production.

If you’re interested in working behind the scenes or auditioning for a role on stage for the upcoming musical, The Mysterious Case of Edwin Drood, see Parker or Matthew Barbosa for more information.