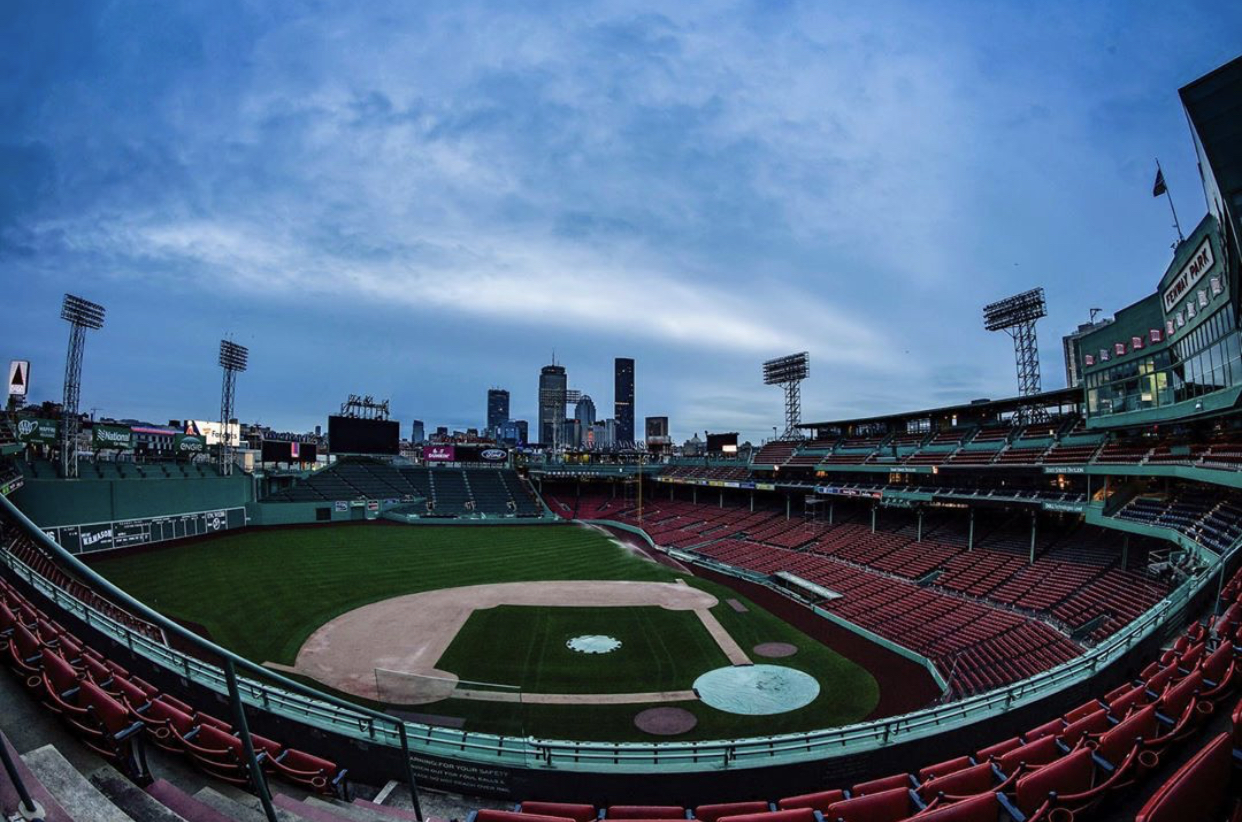 Caption: The sun rising at the empty Fenway Park, the morning of Apr. 2. It was supposed to be the Red Sox Home Opener, which has now been postponed indefinitely. “Despite no baseball, the Opening Day sunrise photo must live on,” said Billie Weiss, Red Sox photographer. (Billie Weiss)

Caption: The sun rising at the empty Fenway Park, the morning of Apr. 2. It was supposed to be the Red Sox Home Opener, which has now been postponed indefinitely. “Despite no baseball, the Opening Day sunrise photo must live on,” said Billie Weiss, Red Sox photographer.

The Coronavirus’ Impact on Sports

Other Cancellations in Sports

*For the first time in its 124 year history, the Boston Marathon will not be held on Patriots Day, but instead, the race will be held Sept. 14.

*The WNBA has postponed the start of their season indefinitely. It was originally scheduled for May 15.

*The National Football League has postponed many of its offseason events and is looking into postponing the NFL draft at the end of April.

*The Indianapolis 500 has been moved to August 23, and won’t be held during Memorial day weekend for the first time since 1945

*The Tour De France has been moved to August 29- September 20.

While you are sitting home trying to figure out what to do with yourself while social- distancing or self- quarantining, you can always sit down and watch a few sporting events that you have already seen.  Maybe you watched the 1986 Masters last weekend or the first episodes of the new Michael Jordan docu-series. Or maybe you watched the New England Patriots’ Super Bowl LI victory over the Atlanta Falcons along with Tom Brady, playing on Fox a few Sundays ago. A great game even when you already know the ending, right (Spoiler alert, there’s a comeback)? But seriously when are the real games coming back? Right now, that’s not looking great.

On the basis of the information the IOC has, the postponement has been decided”

For starters, the Tokyo Olympics have been postponed to July 23, 2021. Dick Pound, the International Olympic Committee’s (IOC) longest-serving member, announced on March 23, that the Olympics would officially be postponed due to the coronavirus pandemic. In a statement to USA Today, he said, “On the basis of the information the IOC has, the postponement has been decided, the parameters going forward have not been determined, but the games are not going to start on July 24, that much I know.” A few days later the new 2021 dates were made official by the IOC. So if you were really looking forward to this year’s summer Olympics, you’ve waited four years. What’s one more?

The National Basketball Association (NBA) and the National Hockey League (NHL) were in the midst of their seasons after being postponed indefinitely on Mar. 11. The NHL was scheduled to close out regular-season games on Apr. 4 and begin playoffs on Apr. 6. They currently have 189 games remaining in their season. As for the NBA, they have been hit hard by the coronavirus, with many of their players contracting the virus. They are looking at a mid-to-late June return to their season, which is when their season was scheduled to end.

On Apr. 1, The All England Club canceled Wimbledon for 2020 due to the growing number of coronavirus cases in Europe. “It has weighed heavily on our minds that the staging of the Championships has only been interrupted previously by World Wars but, following thorough and extensive consideration of all scenarios, we believe it is ultimately the right decision to cancel this year’s Championships, and instead concentrate on how we can use the breadth of Wimbledon’s resources to help those in our local communities and beyond,” said Ian Hewitt, the All England Tennis Club chairman.

Major League Baseball (MLB)  was supposed to have Opening Day on Mar. 26,  which was postponed, and the rest of Spring Training was canceled. On Mar 26, in a statement issued by the MLB, Commissioner Robert Manfred said, “Today is unlike any Opening day in Major League Baseball’s long history. We need to call on the optimism that is synonymous with Opening Day and the unflinching determination required to navigate an entire baseball season to help us through the challenging situation facing us all.”  Currently, the latest update on when the season will return was on Mar. 27, and the league was aiming for mid-May. Whether that time frame will stick should be revealed in the next few weeks.

These circumstances aren’t just something unseen in the history of Opening Day, as Manfred stated, but unseen by everyone around us. As we witness history unfold, it will be interesting to see what other events are affected and how the world of sports will adapt to the changes. But for now, turn on any sports channel to watch a historic game, your favorite teams, or an ESPN 30 for 30. While history is being made right in front of us, you can spend your social-distancing watching the sport’s history that has already happened.