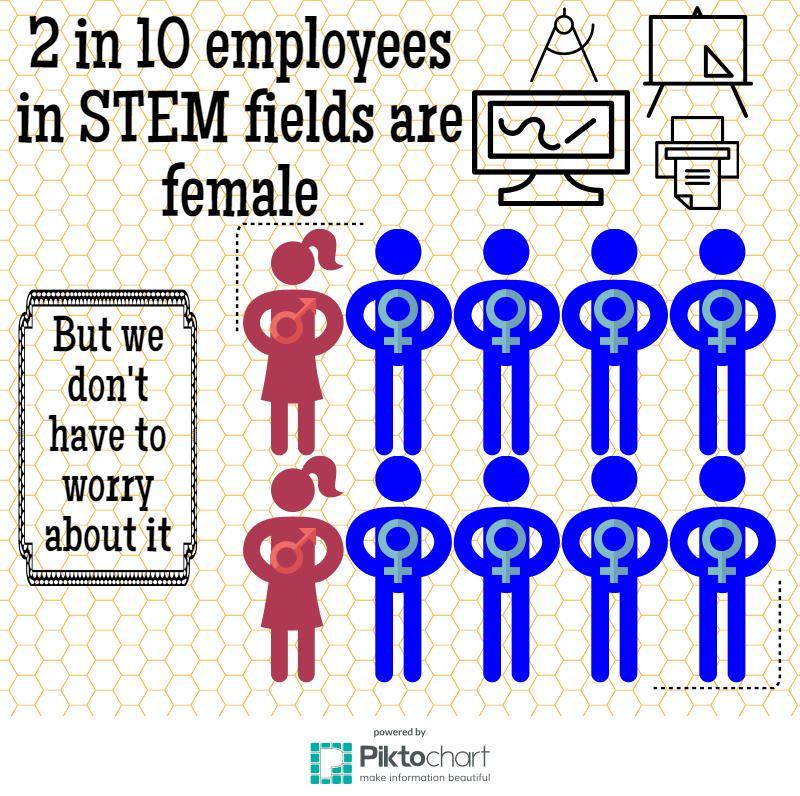 Why we shouldn’t worry about the gender gap

It’s common knowledge that science, technology, engineering and mathematics (STEM) fields are routinely male-dominated areas. The number of initiatives meant to change this have skyrocketed in the past decade. As a result more and more females are earning their Bachelor’s degree in a STEM field and entering the workforce.

For women who, in the past, were discouraged from entering these disciplines, this is great news. But as we move well into the twenty-first century and STEM fields open up to women, do we have to continue with excessive promotion in order to encourage females to enter these fields?

Why are we so concerned about the gender gap in STEM fields? Some feminists would say that the harsh difference in the male to female ratio is unfair to women and that it implies that women are inferior to men. According to a report from the U.S. Department of Commerce, less than 25% of the positions in STEM fields are held by women.

Well that’s outrageous! We as a society should do something!

Women are inherently different than men. These differences are normal, common and often times out of their control. Due to these changes in male and female brains and psychology, girls biologically think differently.

According to an article released on Masters of Healthcare by Amber Hensley, “Men tend to process better in the left hemisphere of the brain… [they] approach problem-solving from a task-oriented perspective while women typically solve problems more creatively…” This is among handfuls of other examples of how women and men naturally differ.

Often times, women are biologically less adept at considering things in a logical fashion. Because of the female’s common and ancestral role of primary caretaker, women have adapted to be more emotionally-present than men and as a result, have lost part of the logical thinking processes.

However, because of these differences, women often gravitate towards female-dominated fields such as teaching and counseling, which are examples of careers that use more of the right hemisphere. These professions allow for the emotional connection and constant communication that many women prefer to hardwired robotics and cold, metal products. Mechanical engineering and applied mathematics don’t always come easily to women and often don’t naturally appeal to women.

The same logic applies to men. Female-dominated careers such as veterinary sciences, teaching, journalism, and psychology sometimes don’t bring the same allure to men as they do to women.

Should men be shamed for entering female-dominated fields? Should we create initiatives to create more male vets? Should women feel guilty about becoming teachers and following a traditional path?

Instead of encouraging women to get into STEM fields, let them make their own decisions. For that matter, let men choose their future careers as well. Whether it be interior design or computer engineering, male or female, the choice for one’s future career is one’s own to make and it is not the job of society to judge or hinder one’s progress.